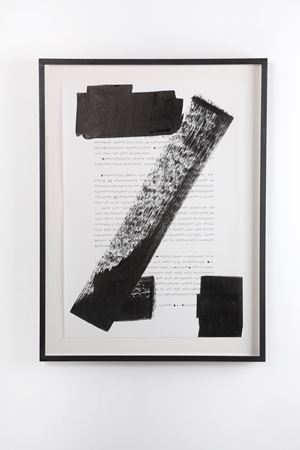 TARO NASU propose a solo show by Ryan Gander, TIME WELL SPENT. This presentation will be consist of 3 works under the theme of time. The 1st work Time Well Spent displays two functioning vending machines. They are displaying and selling black stones collected by the artists children, one of which has a diamond inset into it's the surface of its reverse invisible throughout the glass; a series of black casts of the ten digital watches available commercially; a selection of used key cards to hotel rooms form the artists collection, one of which unlocks the door to a room that has been rented for the entirety of the fair and six USB sticks containing a continuous recording of the end run out of a series of vinyl pressed records that containing the word time in their title. The work Like time, when it's gone its still there is a wallpaper, covering the walls of the entire space documenting the 244 pages of  'If on a winters night a traveler', a recursive narrative written in 1979 by Italio Calvino, typeset here in a typeface newly-invented by the artist. Over the top of the prints, Gander has executed annotations using a large calligraphy brush and black Japanese ink. And there will be also the original paintings of Pre-everything; Stabs at academia with painters tools (Page Seventy-Two), framed annotations to a recursive narrative painting, mounted on a thick-white parchment. The solo show will explore Gander's unique process of thought and his creation.