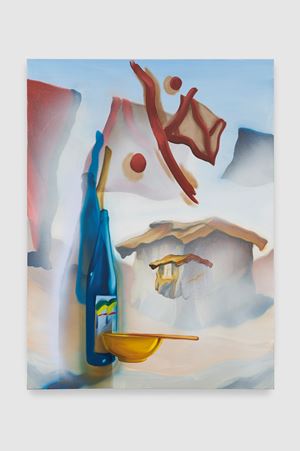 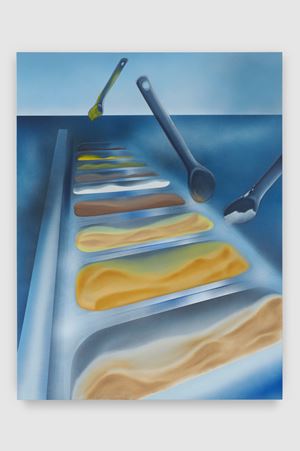 THE CLUB is pleased to present Thermals of the Heart, Nicholas Hatfull's first solo exhibition in Asia.

Born in Tokyo, Hatfull lives and works in London. His work has been included in group exhibitions at Saatchi Gallery, MACRO (The Museum of Contemporary Art of Rome), and the Fondazione Giorgio e Isa De Chirico.

Ice creams, motorway and hanged clothes on a clothesline. These nostalgic yet gauzy and vivid images of daily objects and ordinary landscapes are captured by Hatfull's unique technique, which uses iPad sketches and spray paint, allowing the images to flow in the canvas with smooth touch and distinctive transparency. They are as if fragments of memories that keep recurring in one's mind, some parts becoming more emphasised and some parts melting into the atmosphere as time passes.

Hatfull's vision is also deeply influenced by the imagery of Yasujirō Ozu films which delicately reflects our everyday life. Overlaid with Hatfull's own slippage, his painting turns mundane sceneries into something surreal and intimate.

'Wind tousling grass, wind animating laundry; recurring vignettes in Ozu Yasujiro's transitional sequences. ... And it is his colour films particularly that have strewn images in my memory; futon covers, shirts and towels.'

In this exhibition, THE CLUB will introduce 14 of his most recent paintings. Please visit us and enjoy a selection of Nicholas Hatfull's new works.

Thermals of the Heart

Sign up to be among the first to know when new exhibitions by Nicholas Hatfull or at The Club open.