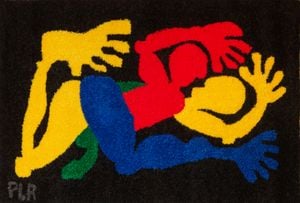 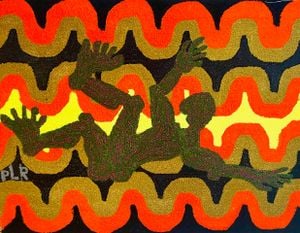 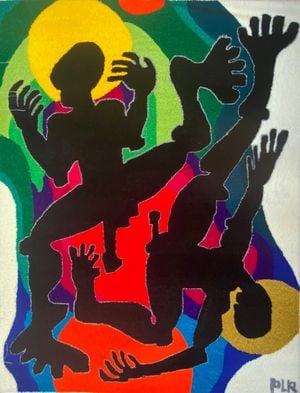 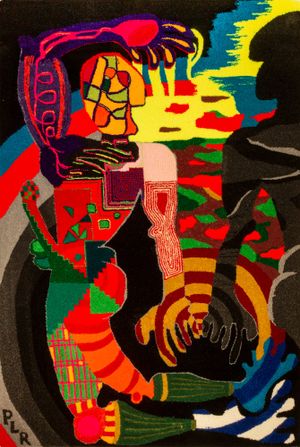 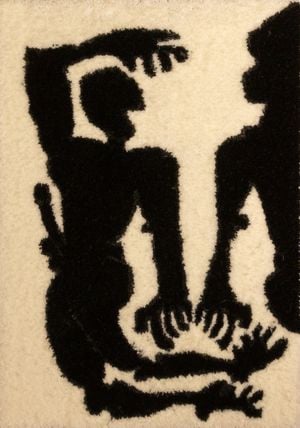 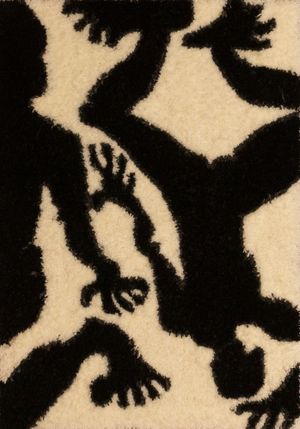 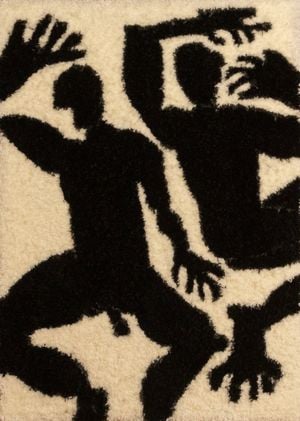 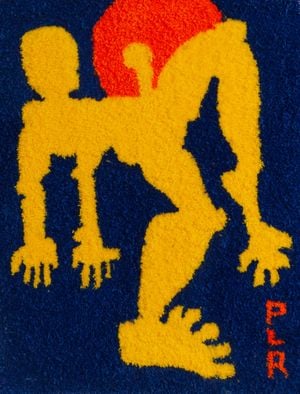 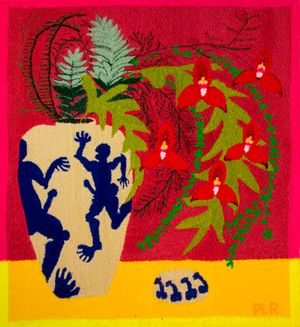 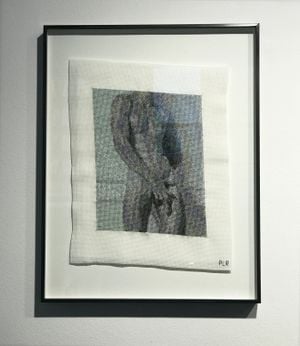 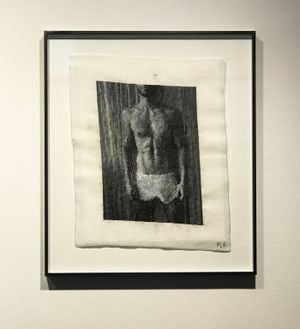 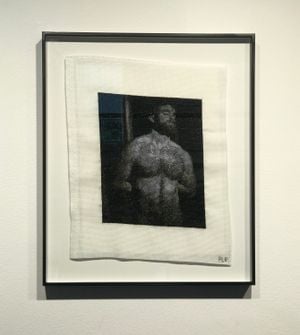 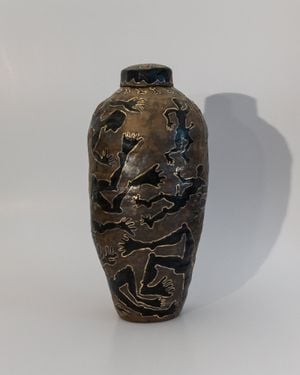 Continuing his ongoing exploration of thread and textiles, Le Riche has created a series of 14 narrative tapestries interrogating the nuances of queer subculture. Each tapestry is meticulously handmade by the artist, with fine detailing and bold colour use. The exhibition will be accompanied by an online presentation on the THK Gallery website, with an exhibition text by Sean O'Toole.

Says Le Riche, 'It is forbidden to keep all my lovers, so I harbour my feelings in containers adorned with my memories of them. My lust is carved in clay, vitrified and shattered. My adoration is lost in a shipwreck in a hull lined with amphorae filled with it. My love is consolidated, incinerated and divided among urns kept in a crypt so veiled that even I have forgotten its location.

This first iteration of the collection comprises a series of story boards, created in both carved ceramic and yarn-tufted tapestries, depicting intimate moments between dreamt-up characters. In these works the characters act out real life moments with fictitious outcomes, and vice versa. In most cases the characters are male, addressing masculinity as being in a constant tug-of-war with itself. The bodies are portrayed as primal and highly sexualised. Their bodies are elongated and fluid, and constantly contorted to fit into the frames they are depicted in. Moments depicted are those of intense chemistry, be it positive or negative, with emotional residues left behind.'

Pierre le Riche lives and works in a split-level studio apartment on Hout Street located three blocks from where his debut solo, Urns for the Ashes of my Lost Lovers, is on view at THK Gallery.

The light-filled space with creaky wooden floors that Le Riche recently moved into was formally a pied-à-terre for a weaving business that still operates a micro mill and retail store on the ground floor. When he moved into the apartment, Le Riche split its functions between the two floors he occupies. He lives upstairs with his partner Hannes Mouton, and keeps the tools and implements of his practice in the studio below.

Le Riche has diverse interests and capabilities as a maker. In his studio, surrounding a central worktable heaped with wool and other threads, there is a pottery wheel, kiln, woodwork bench and band saw. The walls throughout the apartment are decorated with examples of Le Riche's work, including glazed ceramics and various textile pieces demonstrating his love for vivid colour and geometric pattern. In a cosy lounge adjacent the studio hang two embroidered portraits.

One depicts Mouton and the other is a self-portrait of Le Riche, who the son of Cape farming stock and Namibian traders. For those who have tracked his ambitious sculptural and textile practice since he graduated with an MFA from the Michaelis School of Fine Art in 2017, Le Riche's figurative embroideries might come as a surprise. While the tapestries are a continuation of his fibre-based work, the human subject was, until recently, implied rather than stated in Le Riche's work. His 2017 MFA exhibition, for instance, included wooden chairs that he based on designs by Boer pioneers and slaves. He was drawn to these modest objects because of their oblique yet embedded material links to his Afrikaner heritage. Given their specific function of accommodating the body, Le Riche has written, a chair can suggest absence, presence and solitude.

Le Riche's new tapestries and embroideries at THK Gallery unambiguously place the figure front and centre of his practice. 'It is the first time that I am exhibiting anything like this,' the artist says. 'My work over the last two years has been very restrained.' He credits the shift to downtime following minor surgery in early 2021. While recovering Le Riche began sketching bold masculine forms with a sharpie in a sketchbook. The volumes of his zestful and frolicking nude figures recall Matisse's Blue Nudes (1952), Rodin's erotic watercolours and the mid-century forms of Walter Battiss and Ezrom Legae. The energetic colour palette he uses for his larger tapestries also brings to mind the Cape colourist Barend de Wet.

'I rarely reference art history in a direct way,' says Le Riche, whose figures in his tapestries at THK are extrapolations of those appearing in his sketchbook. 'My studio is a solitary space. I work alone. I don't read the news. I have removed myself from social media.' Le Riche's current splendid isolation was prefaced by a period of close looking at the work of other makers. An encounter with Louise Bourgeois's installation Articulated Lair (1986) at the Guggenheim Museum Bilbao a few years ago was formative. For his MFA he spent time at the Ditsong Cultural History Museum in Pretoria documenting its extensive collection of over 1200 chairs. He previously shared a studio with the acclaimed textile artist and lace maker Pierre Fouché, whom he describes as a mentor.

The solitude of the new studio environment suits Le Riche's shy yet strong personality. 'I'm happy being in the studio alone,' he says–it allows him to focus on a demanding labour. The process of completing a large tapestry – from transcribing a rudimentary cartoon of cascading figures to applying colour thread with a mechanical tool – takes about two weeks. "The work is physically demanding and requires complete immersion in the process. The problem solving and composition issues get resolved on the canvas.'

Le Riche's output of tapestries includes smaller monochromatic figure compositions and large pieces that showcase his predisposition to colour. The three embroideries on show were started in 2020 and speak to his patient investment in artisanal work. 'It is everything a Bellville upbringing is not,' says Le Riche of the flagrant materiality and iconography of the works in his debut solo. 'It is unabashedly queer and in your face.'

The work is also deeply autobiographical, registering personal disappointments and regrets. The titular urn in his only still life registers a note of mourning. Ultimately, however, Le Riche has chosen to signal a new phase in his practice, one marked by a celebratory embrace of fertility and life.

Urns for the Ashes of My Lost Lovers

Sign up to be among the first to know when new exhibitions by Pierre Le Riche or at THK Gallery open.
Sign Up
}