Zhang Hongtu was born and raised in a devoted Chinese Muslim family. Zhang entered the Central Academy of Arts and Crafts in Beijing in 1964 and graduated in 1969, but due to unrest during the Cultural Revolution, remained at the school until 1973. In 1980 he went to the Mogao Caves in Dunhuang, Gansu Provine, to study wall paintings, which left a lasting influence on his art practice. He moved to New York in 1982, and received the painting prize from the Pollock-Krasner Foundation in 1991.

Inspired by Mao Zedong, in 1987 Zhang Hongtu retouched the man on the Quaker Oats carton to closely resemble Mao in the work Quaker Oats Mao (1987), and other works such as Chairmen Mao (1989), in a satiric deconstruction predating China's Political Pop art movement, which became very well-known in the early 1990s. In recent years, Zhang Hontu has shifted his focus to "shan shui." Having worked on the Repaint Chinese Shan Shui series since 1998, he has consciously emulated the painting styles of such masters as Paul Cézanne (1839-1906), Vincent van Gogh (1853-1890) and Claude Monet (1840-1926) for well over a decade, such that he has created his own distinguished style by juxtaposing the East and West.

Related Video & Audio Proof of Concept – Zhang Hongtu 15 November 2021, https://vimeo.com/303187404 Xin Fang, Before He Starts (2018) is a short documentary documenting a Muslim-Chinese artist, Zhang Hongtu, to rediscover his pulse of being an artist after a decades-long journey. 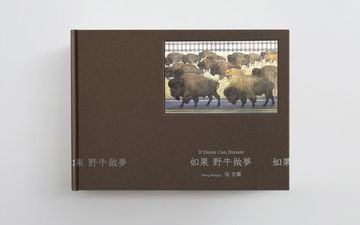 If Bison Can Dream Zhang Hongtu