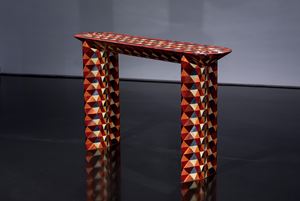 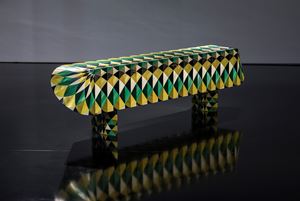 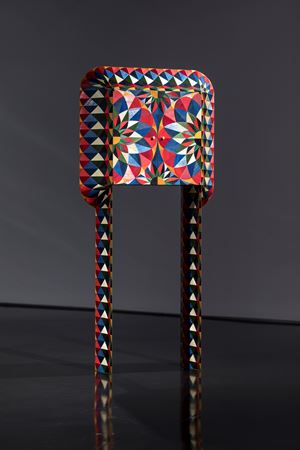 When Arthur Seigneur, a young French artisan newly arrived in Sydney, contacted leading-edge industrial designer Adam Goodrum in 2015 to ask if they might work together, neither of them could have predicted what would eventuate. But less than three years later, the Bloom cabinet, the first fruit of their collaborative endeavour as A&A, debuted to critical acclaim at the Milan Furniture Fair before being acquired by the National Gallery of Victoria.

A stunning synthesis of design innovation and traditional craftsmanship, the unique work, made of oak and white maple, cloaks its handmade cabinetry behind two oversized doors that form a circle, 140 cm in diameter, when closed. This provided the surface for the application of Arthur's calling card, straw marquetry, or marqueterie de paille, employing more than 4000 slivers of subtly reflective rye straw imported from specialist producers in Burgundy and hand-dyed by the artisan himself in a range of custom hues.

Now, on the occasion of A&A's debut with Tolarno Galleries, the duo has produced a further three unique pieces of furniture that build on the creative insights gleaned from bringing Bloom to glorious life. Using just a scalpel, ruler and wood glue, Arthur has decorated Talleo, a tallboy, Archant, a console, and Longbow, a credenza, in a series of richly coloured geometric patterns that are themselves informed by the shape of each item. While Adam conceived the initial designs and patterns, they were finessed in dialogue with Arthur so as to maximise straw marquetry's dazzling visual effects.

Sign up to be among the first to know when new exhibitions by A&A or at Tolarno Galleries open.
Sign UpLogin