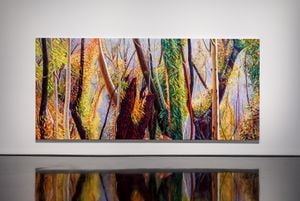 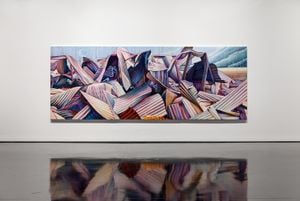 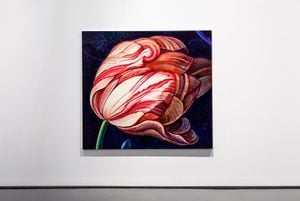 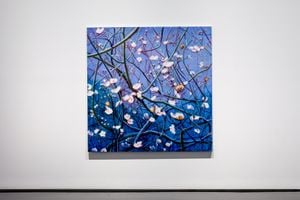 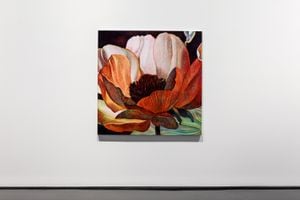 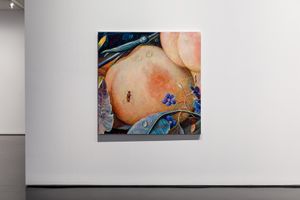 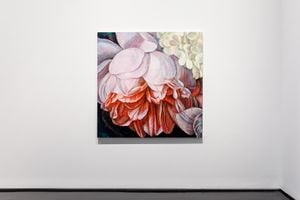 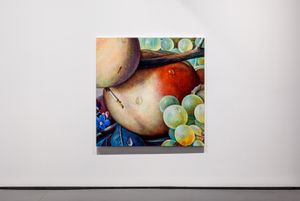 Bell (pictured above) is one of two large-format triptychs in Tim Maguire's new series of paintings, Old World, New World. Created using a colour separation technique, Maguire converts the original photographic image into three layers: yellow, magenta and cyan. The painting emerges from successive layers of transparent oil pigment applied to a white canvas with a broad brush. Yellow first, then magenta, and finally cyan. Before each layer dried, he peppered it with spots of solvent.

"The leaves down in the bottom left-hand corner could be flames, and that charred trunk in the centre might still be burning," says Maguire, adding that he achieved the glowing effect of embers by splashing solvent onto the cyan layer to expose the red made from magenta and yellow. "The sense that the fire could still be in there came to me while I was painting it."

Maguire was especially struck by the virginal whiteness of some of the trunks, their bark sloughed off by the conflagration. "This painting is about damage but also rebirth," he says. "It's a little bit spiritual – they could be ghosts, or relics."

Bell signals the artist's return to a subject matter he last explored in 2015 with his multi-panel digital pigment print, Kinglake Panorama. That landmark work, an impression of which is in the collection of the Art Gallery of South Australia, was based on a montage of photos taken by Maguire a year after a catastrophic fire tore through the eponymous Victorian town in the Black Saturday bushfires of 2009.

"You see the evidence of this massive force that has laid the landscape to waste, and the energy of the regrowth," he wrote in a text to accompany his survey show, Everything Changes, at Newcastle Art Gallery in 2017. "This destruction and transformative regeneration is, I hope, mirrored in my process, whereby an image is pulled apart into its constituent colours, and remade."

Sign up to be among the first to know when new exhibitions by Tim Maguire or at Tolarno Galleries open.