Sarah Sze discusses her sculpture Measuring Stick (2015), which explores the "measurement of time and space through the moving image." Sze remembers watching Charles and Ray Eames's Powers of Ten as a young student in the 1970s, and cites the film as an inspiration for her work. "That was something I always looked forward to seeing." Sze's sculpture originally began as a film but evolved into a three-dimensional work that resembles an editing desk, reflecting the moving image through the inclusion of flickering light, and references to "scientist image-makers." Sze describes the diaphanous sculpture as an "experimental site" that "tries to actually measure a kind of behavior." 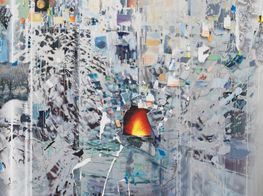 Sarah Sze is an American artist known for her intricate installations and taxonomic arrangements, both consisting of everyday objects. A fluid amalgamation of two-dimensional image, sculpture, video, installation and science, Sze's work not only

When I am installing, I always think about what the first sentence in a book is, and how different that might be from the last sentence. There are narrative transitions.