Joan Miró (b. 1893, Barcelona, Spain; d. 1983, Palma, Spain) is a Catalan painter, sculptor and printmaker famous for his important contribution to Surrealism. Early influences on Miró include Fauvism, Cubism, Catalan folk art and Romanesque church frescoes. In 1920s Paris, Miró meets André Masson, Paul Eluard, Pablo Picasso and many others associated with Dada, before Breton describes him as 'the most surrealist among us'. Miró's mature style deploys a complex iconography of biomorphic forms and symbols in a distinctive palette of primary red, green, blue, yellow and black. His dreamscapes are the visual manifestation of surrealist poetry, a constellation of innocent and sophisticated forms intended to challenge the tradition of painting. The turmoil of the Spanish Civil War and the Second World War precipitated the menacing imagery of Miró's work in the 1940s, when he had returned to Spain. In later life, Miró created many ceramic works and monumental works. In 1975, the Fundació Joan Miró opened its doors in Barcelona.

Miró studied at the Barcelona School of Fine Arts in the period 1912-15. His first solo show is held at the Galerie Dalmau, Barcelona, in 1918. Miró first moved to Paris in 1920, and the following year has his first solo exhibition there. He participates in the Surrealist Painting exhibition at Galerie Pierre Loeb in 1925. In 1930, Miró has first exhibition in New York, at the Valentine Gallery. In 1941, the Museum of Modern Art organizes a major Miró retrospective exhibition. In 1947, Miró participated in the important Surrealist group exhibition Surrealism in 1947 at Galerie Maeght in Paris. Subsequent retrospectives include the Kunsthalle Basel (1952); Museum of Modern Art (1959); Musée d'art Moderne de la Ville de Paris (1962); Tate Gallery (1964), travelling to Kunsthaus Zurich; Fondation Maeght (1990); and Tate Modern (2011), travelling to Fundació Joan Miró and the National Gallery of Art, Washington, D.C. 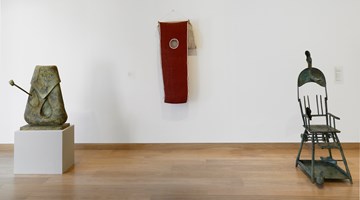 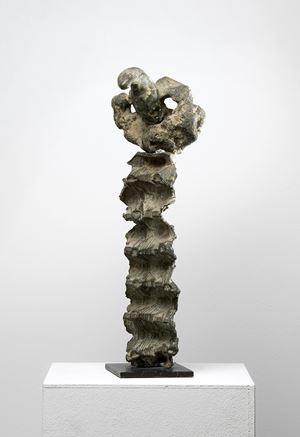 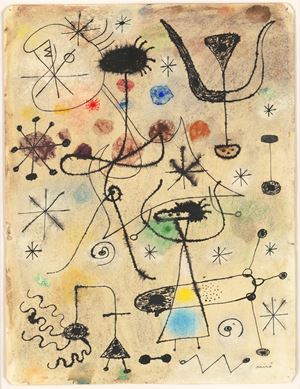