André Hemer (b. 1981, New Zealand) is a painter whose work investigates the bounds of materiality and appearances, and what it means to create paintings during a time in history in which the experience of an object is continuously blurred between states of physical and digital experiences.

Hemer scans physical objects – three-dimensional paint forms or found objects such as flora – en plein air to capture a version of the object, and its surrounding exposure to the natural elements of the sun, sky and lights from the scanner. Most of his recent works are captured across evenings in Vienna (where the artist is currently based) during sunset, where the shift in sunlight conditions are most striking. The resulting images are of vibrant reds, gold, and orange, which are then recomposed, overpainted, and overlaid with three-dimensional sculptural elements to create works that render seamless the demarcation between digital, painted object and the digital artefact. 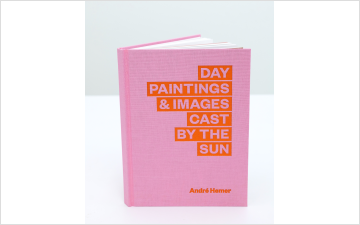