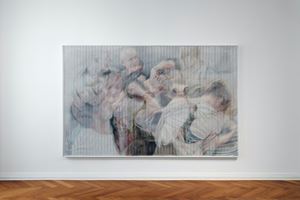 Sandra del PilarWer bin ich und wieviel? (Who am I and how much?), 2019Acrylic and oil on canvas, transparent synthetic fibers
195 x 305 cm Zilberman Gallery Enquire 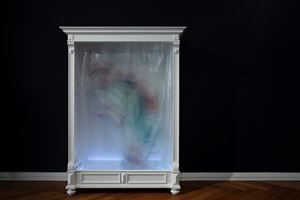 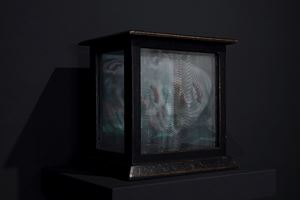 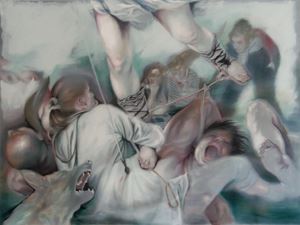 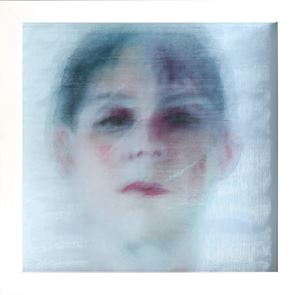 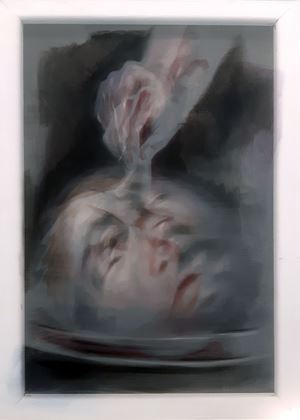 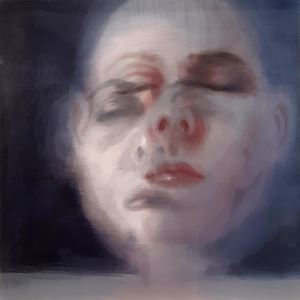 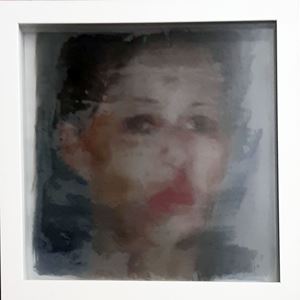 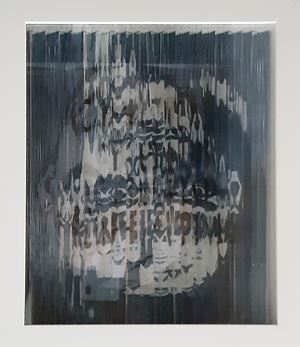 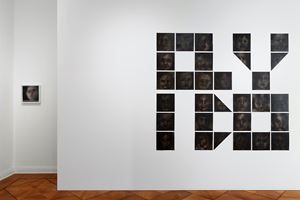 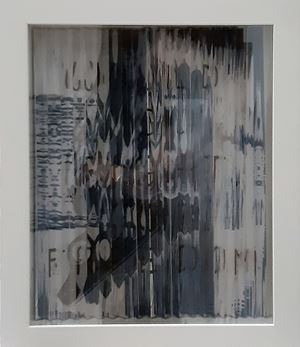 Zilberman | Berlin is delighted to announce the exhibition Both Eyes in My Two Hands by the Germany and Mexico-based artist Sandra del Pilar.

The name of the exhibition – Both Eyes in My Two Hands – is taken from a sonnet by the Mexican poet Sor Juana Inés de la Cruz (1648–95): "tengo en entrambas manos ambos ojos / y solamente lo que toco veo" ("I hold my two eyes in both hands / and see only what I touch"). The sonnet questions whether reality can actually be seen with the eyes, and understood through reason, or whether both aren't rather a dreamlike illusion. Shouldn't we approach the world with the other senses, for example haptically, with the hands?

These are also precisely the questions that Sandra del Pilar looks at in her painting. How does the image capture reality? Is it a visual or a physical phenomenon? What role is played by the blurs of memory, dream and oblivion, which the body (more than the eye) traces?

In her paintings, Sandra del Pilar deals with events that she encounters in everyday life or in the media, and often they are stories of oppression and injustice. She investigates perpetrator-victim relationships, violent acts in the private and public domain, and the draconian punishments of Mexican drug cartels (Giganten – I, 2020), and she remembers the missing and the forgotten. In sequences that seem dreamlike and unreal, Sandra del Pilar allows the current and the historical, the private and the political, individual and collective memory, and the real and the fictitious to meet. Her paintings bring together ways of thinking and feeling from various traditions in intellectual history: lyrical texts, motives from the Baroque era (vanitas, memento mori) or Greek mythology, figures from the Bible (John the Baptist), and metaphors and allegories are interwoven with each other across and beyond time and space.

The paintings are often preceded by long phases of research: Sandra del Pilar conducts interviews with people, with both victims and perpetrators, e.g. prison inmates. She adopts the perspectives of others and in her portrayals uses her own face as a stand-in for others who wish to remain anonymous. At the same time, she is aware of her own partiality; she gets involved. She painted the faces of the missing children in the work Olvido (2014) from memory, having seen the faces on posters in public places in Cuernavaca in Mexico. She coats her representations with a layer of wax, which on the one hand blurs the faces, like fading memories, but at the same time also preserves them. The arrangement of 30 plates forms the word 'Olvido', in translation 'forgetting' or 'I forget', but it actually serves as a direct reminder of the missing children. Sandra del Pilar's approach raises an ethical claim, as if she wants her pictures to do justice, to restore dignity to the victims of violence.

The life-size painting Wer bin ich und wieviel? (Who am I and How Much?, 2019) depicts a group of figures intertwined in each other or drawn on top of each other to different scales, and labelled with dollar prices as in a window display. How do we evaluate a human being today, in an era in which everything is expressed in terms of monetary value? Sandra del Pilar forms something that is beyond the visible. Her focus is on what can't be seen, but which nonetheless persists perceptibly in the imagination. The observer is often overstrained by a wealth of details. The eye and reason reach their limits. Correlations are broken; observers can only perceive fragments that they have to reconstruct themselves in accordance with their own criteria.

This fragmented perception arises through working with multiple image layers. The first layer is the oil painting on canvas over which the artist stretches or hangs a layer or several layers of a transparent synthetic material. The transparent layers are painted in part, elements are repeated from the first layer, or new image elements are introduced. Observers have to move back and forth in front of the painting. It demands their active involvement, since there's no fixed observational standpoint affording them an overview. On the contrary, the depiction becomes unstable. The image layers shift against each other and observers are physically enmeshed in the work. The correspondence between the layers takes the focus beyond each individual layer and also activates the tactile sense. The observers' gaze is guided towards the material surface, which they 'view' both visually and haptically before plunging into the illusionistic depth of the image. Sandra del Pilar thus establishes a somatic- phenomenological relationship between the observer and the painting. Meaning is no longer generated merely referentially; instead, it is the signifiers in their bodily materiality that are themselves the bearers of meaning.

Both Eyes in My Two Hands creates an arc from Olvido via Wer bin ich und wieviel? to Sandra del Pilar's installative works, including Almost a butterfly (2020). A painted canvas and several layers of painted transparent fibre are hung in an old wardrobe, giving the impression of a cocoon in which something more sensorially discernible rather than clearly visible is developing. The canvas and the thin layers of material are protective sheaths. The work addresses the state of being physically interwoven with nature, with the process of emergence between past and future, a motif of hope.

Sandra del Pilar (*1973, Mexico City) grew up in Mexico and Germany and today spends one half of the year in Soest (Germany) and the other half in Cuernavaca (Mexico). She studied painting at the Academia de San Carlos in Mexico City, graduated in art history at Heinrich Heine University Düsseldorf and in painting at the arts and design faculty of the Universidad Nacional Autónoma de México (UNAM). She is currently a scholar at the Sistema Nacional de Creadores de Arte des Fondo Nacional de la Cultura y las Artes (FONCA) in Mexico. Del Pilar has held scholarships from the German Academic Scholarship Foundation and the German Academic Exchange Service (DAAD) and has also received funding from the Rhineland Regional Council (LVR). Her artistic work has received many awards both in Mexico and also in Germany. Her works are shown around the world. Most recently, a documentary film about her artistic work by Sergio Sanjinés was premiered at the Cineteca Nacional in Mexico City. Her texts and essays have been published in international journals, anthologies, catalogues and newspapers.

Text: Lotte Laub, translated from the German by Nickolas Woods.

Both Eyes in My Two Hands

Sign up to be among the first to know when new exhibitions by Sandra del Pilar or at Zilberman Gallery open.