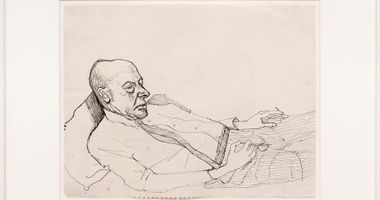 In her acclaimed portraits, Alice Neel captured the distinctive personality and atmosphere of her subjects, who included friends and family, artists and intellectuals, and the residents of her New York neighbourhoods.

Born in 1900 in Pennsylvania, Alice Neel graduated from the Philadelphia School of Design for Women in 1925. Shortly after, she married Cuban painter Carlos Enriquez and moved with him to live in Havana. Neel's portraits from her time in Cuba typically show her husband and friends in their avant-garde inner circle, as well as the marginalised local community, in whom she would maintain a lifelong interest. In Mother and Child, Havana (1926), Neel uses generous swathes of browns and pinks to depict a mother lovingly holding her child.

Upon returning to the United States in 1927, Neel and Enriquez settled in New York. Their marriage did not last long: after the death of their first child to diphtheria, the artist suffered a nervous breakdown; Enriquez left her three years later, taking their second child with him back to Cuba. Neel spent the following year in a mental asylum, during which 'a deep, psychological charge' took over her works, as Sharmistha Ray wrote in an article for Ocula Magazine. Compared to her earlier portrait of a mother and child in Havana, Degenerate Madonna (1930) is rendered in cold blues and greys. It features a melancholic mother dressed in black with exposed, sagging breasts accompanied by her young child, who has an alarmingly large and pale head.

Neel spent much of the 1930s in Greenwich Village, painting its residents in her characteristically earnest, Expressionist style. Like many of her contemporaries, she was also a member of the Works Progress Administration during the Great Depression. Although she painted consistently, little of the artist's works from these years survive: in 1934, her then-lover, sailor Kenneth Doolittle, destroyed more than 350 of her paintings in a jealous rage.

Harlem, Upper West Side, and Recognition

In 1938, Alice Neel moved to Spanish Harlem for a change of atmosphere, where she encountered the immigrant families who came to frequent her portraits. Whether anonymous (Two Girls, Spanish Harlem, 1959) or named (Elsie Rubens, 1960), Neel's subjects are painted with the same interiority and intensity of character.

Neel relocated to the Upper West Side in 1962, residing there until her death in 1984. There, she began to obtain greater attention than she had previously received, going on to hold a retrospective exhibition at the Whitney Museum of American Art in 1974. Works from this later period of Neel's life include well-known artistic and cultural figures, such as Robert Smithson (1962), and the famous portrait of Andy Warhol (1970) after Valerie Solanas shot him two years prior.

Neel also continued to paint her friends, family, and the overlooked, challenging notions of acceptability in portraiture. Among her most daring works is Self-Portrait (1980), painted when the artist was 80. In it, Neel appears nude and seated in a sofa, revealing a non-idealised, aged female body rarely represented in society.

With a career spanning six decades, Alice Neel has been the subject of numerous retrospective and major solo exhibitions. Examples include Alice Neel: People Come First, a survey at the Metropolitan Museum of Art, New York, in 2021; Alice Neel: Painter of Modern Life, which traveled throughout Europe between 2016 and 2018; and Uptown, a solo exhibition curated by the Pulitzer Prize winner Hilton Als for David Zwirner New York, which also went on view at Victoria Miro's Venice and London locations in 2017. Alice Neel: Painted Truths, organised by the Museum of Fine Arts, Houston, travelled to Whitechapel Gallery, London, and the Moderna Museet Malmo, Sweden, in 2010. In 2022, Centre Pompidou is to present the solo exhibition Alice Neel: Un regard engagé in Paris.

Alice Neel's work was also part of Soul of a Nation: Art in the Age of Black Power, a group exhibition that travelled to Tate Modern, London; Crystal Bridges Museum of American Art, Arkansas; Brooklyn Museum, New York; and The Broad, Los Angeles, between 2017 and 2019.

With The Armory Show opening to the public on 7 March and a host of other fairs taking place concurrently, Sharmistha Ray presents a list of shows to see in New York.

In Basel this week? Don't miss Close Up at Fondation Beyeler. ⁠⁠

Xavier Hufkens' online exhibition of drawings by Alice Neel is one among many upcoming opportunities to catch a glimpse of the artist's unparalleled work. ⁠⁠

Mousse Magazine: How does Alice Neel in New Jersey and Vermont represent a specific part of Neel's oeuvre? Jeremy Lewison: This exhibition reveals a side of Neel that has not been very visible to

In 1938 the Pennsylvania-born artist Alice Neel moved from fashionable Greenwich Village in downtown Manhattan to Spanish Harlem, where she lived for four years in a small apartment before relocating

Alice Neel, born in 1900, and raised in white, middle-class Pennsylvania, moved to Harlem in New York at the age of 38. She was still recovering from the tragedy of her first marriage, which had seen

Alice Neel is hard to place, isn't she? The New York-based painter, who died in 1984, lived uptown most of her life, but many of her most famous subjects hailed from downtown coteries. Neel must have

Jeremy Lewison, adviser to the Estate of Alice Neel, talks with Angela Lampe, curator of Modern Art at Centre Pompidou, on the occasion of the exhibition 'Alice Neel in New Jersey and Vermont' (26 Oct

Sign up to be notified when new artworks and exhibitions by Alice Neel are added to Ocula.
Sign UpLogin