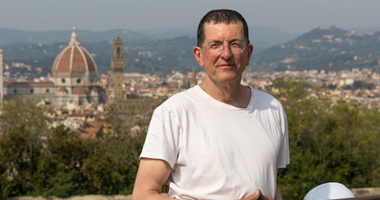 At the centre of Antony Gormley's sculptural practice lies a concern with the subjective space of the human body and its relationship with the objective space of the collective environment that surrounds it. Often working with casts of his own body, Gormley creates various scaled sculptures, from hand-held figures to life-sized and monumental installations that engage the viewer in a contemplation of both the body and the spaces it occupies.

Gormley's earliest works include a series of 'Sleeping Place' sculptures from the 1970s. The works in this series no longer exist, but have been documented in photographs. Gormley created the works by draping plaster-soaked sheets over his friends' bodies on the ground, and then removing the moulded sheets and presenting them as free-standing sculptures. Although hollow, the curves of the plastered sheets suggest a human form in the foetal position. According to the artist's website, he was fascinated by 'the minimum space necessary for a person to establish shelter' that he witnessed during his travels in India (undertaken in the 1970s), where people in the streets or railway platforms would cover their bodies with a sheet of cloth.

Gormley began to incorporate his own body into his work by building sculptures out of bread or making plaster casts sheathed in an outer casing of lead in the 1980s. Bed (1980–1981), for example, is a sculpture roughly in proportion to a king-sized double bed, consisting of stacks of bread that were dried and dipped in parafin to prevent them from rotting. On the surface of the bed are two mirroring negative spaces, each in the form of the artist's silhouette lying down. Gormley used bread as a metaphor for consumption and the progress of life, combining it with the association between bed and milestones of life such as conception, birth, and death. Completed four years later, Untitled (for Francis) is a life-sized sculpture made from a plaster mould of Gormley's body. The figure, encased in lead, stands upright with his arms wide open, slightly looking up at the sky, a posture that recalls St Francis in Giovanni Bellini's painting St Francis in Ecstasy (c. 1479–1485). Gormley's reference to Christianity is reinforced by the punctures in the lead surface of the sculpture, which evoke a Christian saint receiving the stigma.

In 1995, Gormley created a seminal artwork entitled Critical Mass. The work explores the body's solid mass and comprises 60 life-sized cast-iron sculptures cast in 12 basic body postures, from the contemplative to the supplicant. Critical Mass was originally made to be installed in the Remise (an old tram storage station in Vienna). For this version of the installation the artist dumped many of the sculptures from the back of a truck to allude to the victims of the 20th century. Since then, the work has been exhibited in different sites, such as on the roof of the De La Warr Pavilion in East Sussex in 2010, and at Forte di Belvedere, Florence, as part of the artist's solo exhibition, Human, in 2015. In an interview with Ocula Magazine in 2015, the artist described Critical Mass as 'the forensic evidence of a lived moment in time', responding to the horrors of the past and overpopulation.

Gormley's sculptures can be found in various public spaces and around the world. Angel of the North (1998), a 20-metre-tall steel sculpture overseeing a hill in Gateshead, is arguably the best known and shows an upright figure with a pair of outstretched wings for arms. Conceived as a memorial to the coal miners who brought wealth to the North East to the 19th and 20th centuries, the work has since become a landmark of Gateshead. Another Place (1997), which consists of 100 life-sized cast iron figures staring out to the horizon, was installed on Crosby Beach in 2005 by Liverpool Biennial and is also among the artist's most famous public artworks. In 2007, the artist initiated a touring public art project called Event Horizon that installs life-sized figures looking out into space on the ground level or atop buildings in international cities. First displayed in London, the project has travelled to New York (2010), São Paulo (2012), and Hong Kong (2015).

Gormley studied archaeology, anthropology, and art history at Trinity College, Cambridge, from 1968 to 1971. He then attended London's Central Saint Martins and Goldsmiths, before completing his studies with a postgraduate course in sculpture at the Slade School of Fine Art, London, in 1979. He was the winner of the Turner Prize in 1994 for 'Field' (1989–2003), a series of works in which he gave directions to a local community to produce tens of thousands of hand-sized figures. The resulting sculptures were baked locally and installed on the floor of a gallery space. For the American version in 1990, the artist worked with an extended family of brick-makers in San Matias, Cholula, Mexico, members of whom—ranging from age six to over sixty—made 35,000 figures. For the 2006 Biennale of Sydney, the installation consisted of 180,000 small clay figurines crafted by 350 Chinese villagers in five days from 100 tonnes of red clay.

In addition to being awarded the Turner Prize, Gormley was awarded the South Bank Prize for Visual Art in 1999, the Bernhard Heiliger Award for Sculpture in 2007, the Obayashi Prize in 2012, and the Praemium Imperiale in 2013. In 1997, he was made an Officer of the British Empire (OBE) and was made a knight in the New Year's Honours list in 2014. He is an Honorary Fellow of the Royal Institute of British Architects, an Honorary Doctor of the University of Cambridge and a Fellow of Trinity and Jesus Colleges, Cambridge. The artist has been a Royal Academician since 2003.

See eight of the most collectible art works made during a hard but historic year.

LONDON — The English sculptor Antony Gormley is a man who believes in the art of spectacle. Of the 12 galleries devoted to this career-spanning retrospective at London's Royal Academy, three of them

Five winners of the Turner prize are demanding an end to BP's sponsorship of the National Portrait Gallery, stepping up the campaign against big oil's involvement in the arts. Antony Gormley, Rachel

On the peak of Mount Kynthos on the island of Delos, a solitary figure gazes out across the heather-blue pelt of the Aegean Sea. Impossible not to believe that he was here when, so Homer tells us, Ody

Read More
Related Press An Interview with Antony Gormley About His Greek Island Show 30 May 2019, Another Man

With a new summer exhibition, the British sculptor Antony Gormley has repopulated the ancient ruins of the uninhabited Greek island of Delos with 29 of his bodyforms – and become probably the first a

London-born artist Antony Gormley seems to feel at home among Renaissance masters, whose works often tackle the same topics that he finds himself embracing some 500 years later. Varying the aesthetic

We talk to the British artist as he shows his sculptures with ancient works in the Florentine museum, and we zoom in on the tiny art works made in Elizabethan and Jacobean times that are the subject o

Sign up to be notified when new artworks and exhibitions by Antony Gormley are added to Ocula.
Sign UpLogin