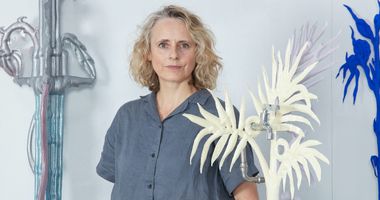 Caroline Rothwell's artworks explore the effects of human intervention on nature, often delving into ideas surrounding consumption and the legacy of colonisation.

Whether as drawings, paintings, or sculptures, Caroline Rothwell often combines flora, fauna and human figures to create hybrid forms. In the bronze sculpture Transmutation (2010), for example, its skeletal human body has an oval frame for its head, decorated by branch-like extensions and a bird that sits atop. Vault (2020), an acrylic painting that received the Sir John Sulman Prize 2020, draws on the 19th century Wunderkammer or cabinet of curiosities—a collection of exotic specimens and artefacts—to examine the West's disconnection from nature and traditional knowledge.

Plants, which feature prominently in Caroline Rothwell's hybrid sculptures, are a 'way of trying to understand place', as she told Ocula Magazine in 2021. In Flow (2013), a wall-mounted 'painting' made from a finely cut piece of structural PVC, architectural structures and various plant forms merge to form a dense portrait of nature. In 2021, Rothwell collaborated with Google Creative Lab to create the multi-channel projection and accompanying app Infinite Herbarium, which creates hybrid plants out of photographs taken by its users.

Rothwell has completed a number of works for public spaces. Dispersed (2009), installed at the Economist Plaza in London and sponsored by the Contemporary Art Society and the Economist Group, consists of bronze Tygers—imaginary animals based on the now-extinct Tasmanian tigers—and PVC paintings featuring hybrid flowers. The 6-metre tall Composer (2016), conceived for the Museum of Contemporary Art Australia, depicts a pinwheel with a small female form attached to its rod. Modeled after Rothwell's daughter, the figure serves as a weathervane—hence the title 'Composer'.

Caroline Rothwell investigates the relationships between humanity, the botanical, and the industrial.

There’s no question, art fairs these days attract a lot of focus. But it’s also fascinating the way they can ignite a city and become a focal point for all sorts of art activity. Th

She stands in George Street in the city wearing a hoodie and cartwheels along the banks of the Parramatta River in Rhodes. But Caroline Rothwell's 12-year-old daughter Sylvia will soon claim even more valuable real estate with the unveiling of her mother's sculpture Composer later this year. The six-metre high sculpture of a...

Be among the first to know when new artworks and exhibitions by Caroline Rothwell are added to Ocula.
Sign UpLogin