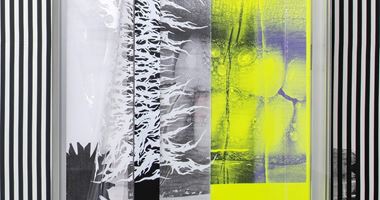 Born in Perpignan in France, Douard was part of the graffiti scene as a teenager. The local streets have long been a starting-point for his work, and today the streets surrounding his studio in Aubervilliers—near Paris—are a source for the discarded materials used in his sculptures. Graduating from the National School of Fine Arts in Paris in 2011, Douard often cites the influence of conceptual art on his work, counterbalanced with a strong desire to remain expressive.

Forsaking American Minimalism's clean lines and purity of form, David Douard's installations are a rough-around-the-edges patchwork of things. His sculptures comprise discarded materials—from metal, fabric, and wood to airbags and sofas—that are reshaped, reformed, cut-up, torn, and compiled together in elaborate constructions. Sometimes they are also infused with an electrical or mechanical component.

Transforming exhibition environments, Douard brings his sculptures together with sound works, films, and written texts to create new hybridised worlds: worlds of multi-sensory and overlapping virtual, mechanical, visual, and tactile experiences. Inviting the viewer's entanglement in these fantasy worlds, the artist breaks down physical barriers between artist and artwork, often even incorporating furniture that visitors are encouraged to sit on.

Although most of the physical material of David Douard's sculptures is from the street, the guiding ideas and much of the text in his works are sourced from places like the dark web. The backbone of his work comes from fragments of poetry and discussions, written in the coarse, deviant language anonymously proffered online. Douard explained in a Frieze studio visit, 'Nobody expresses anything in the street now. Everything happens on the internet. That's the place you have to understand.'

David Douard's digital, physical, and conceptual ingredients are drawn together into the hybrid realities of his installations, which have been exhibited widely across Europe and the United States. David Douard's artworks also feature in public collections such as the Musée d'Art Moderne de la Ville de Paris, and the artist has participated in several biennials and international art events, including the Taipei Biennial and Gwangju Biennale.

Poetry and text feed into Douard's sculptures as vital components, shaping the meaning of his objects and their surroundings.

Sign up to be notified when new artworks and exhibitions by David Douard are added to Ocula.
Sign UpLogin