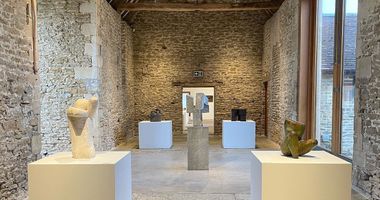 Eduardo Chillida was a Basque sculptor famous for his large, curved finger-like iron or steel forms and outdoor pink granite block sculptures. He was also a consummate printmaker, expert in making etchings, lithographs, and woodcuts, and was awarded many prizes.

Initially a professional goalkeeper when living in San Sebastián, Chillida then studied architecture at the University of Madrid (1943—1947) but became interested in art and moved to Paris to set up a sculpture studio, where he learned skills such as clay modelling, mould making, and plaster carving.

Chillida started with figurative sculpture based on the simplified human form, encouraged by his friendship with the abstract painter and sculptor Pablo Palazuelo, and the Archaic Greek sculptures in the Louvre.

However he soon moved away from the plaster or stone torsos of works such as Recumbent (1949). The artist's projects became much larger and more abstract, and saw him working with forged steel or cast iron after returning to Basque Country in the early 1950s.

A characteristic motif in the public sculpture Chillida methodically explored over the following years involved massive rhythmic and extended linear curves that evoke open hands or claws. These are often made from rust-coloured Corten steel, and the site very carefully chosen. See for example, the gigantic three-part Comb of the Wind (1976), Berlin (2000), and De Musica IV (1999). Sometimes he made concrete versions of these, such as From the Horizon (1956) and Monument to Tolerance (1992).

Other cast-iron works are corners made of heavy slabs, featuring intersecting vertical and horizontal planes, as in Topos V (1986).

Over the period of 1954—1966 Chillida made 'Anvil of Dreams', a series of small portable sculptures based on the process of hammering in a forge, but incorporating vertical blocks of wood as plinths ('anvils') supporting spatially extended steel forms ('hammers'). Examples include Anvil of Dreams XIII (1962), Anvil of Dreams III (1958), and Anvil of Dreams VIII (1959).

In 1961 Chillida travelled through Greece and Italy with his wife Pilar Belzunce and friend Jacques Dupin, the poet. He loved the Mediterranean light, especially its effect on the surfaces of austere white buildings, and the sculpture of Medardo Rosso.

Eduardo Chillida has been the subject of both important solo and group exhibitions.

2017 marked the 20 th anniversary of the Guggenheim Bilbao, the museum that launched the mythical 'Bilbao effect' and dozens of hopeful regional art institutions. The museum ended the year with an ex

Sign up to be notified when new artworks and exhibitions by Eduardo Chillida are added to Ocula.
Sign Up Login