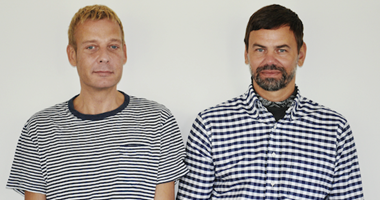 Collaborating since 1997, artists Michael Elmgreen and Ingar Dragset (Elmgreen & Dragset) have actively challenged and reshaped contemporary ideas about the viewing and experiencing of art. Wit and subversive humour almost always accompany their works, as evident in Prada Marfa (2005), which saw the artists place a fake Prada store in the middle of a Texas desert town, and the large sculpture Van Gogh's Ear (2016), which rendered the legendary ear using a domestic swimming pool. 'The noblest role of art', in the words of the artists, is 'to reject responsibility, to exist beyond any logic, to not just be reduced to becoming a reaction to something else.'

Elmgreen & Dragset often seek to challenge the status quo of the art world while maintaining their signature humour. Entering the art world in the 1990s as 'outsiders'—with no academic background in art—the duo confronted the convention of the white cube literally by designing gallery spaces suspended from the ceiling, sunken into the ground or turned upside down. The transformation of these galleries was not simply whimsical; they also sought to reconfigure the rules that have dictated and continue to dictate the experience of art.

The transformation of conventional space is as integral to Elmgreen & Dragset's practice as the objects they may put in the space. In their 2015 show Aéroport Mille Plateaux, the duo transformed PLATEAU, Samsung Museum of Art, Seoul, into an airport. With chairs commonly found in airports and playbacks of announcements for arrivals and cancelled flights, the space dictated the experience and behaviour of its visitors. Through the transformation, the duo explored the interchangeability of institutional architecture.

Elmgreen & Dragset have also demonstrated their prowess as artist-curators on several occasions. At the 53rd Venice Biennale in 2009, in an unprecedented merging of two national pavilions, Elmgreen & Dragset curated the Danish and Nordic Pavilions as a single exhibition. Titled The Collectors, the exhibitions invited more than 20 artists and designers from the two respective countries to fill the homes of fictional art collectors. In transforming an otherwise competitive event into one of participation and intimacy, the duo subverted art world convention once more. Similarly, for their first exhibition in mainland China at the Ullens Centre for Contemporary Art, they turned the institution's great hall into the site of an art fair. Presenting a selection of over 80 of their works from the past two decades, The Well Fair (2016) continued the artists' longstanding interest in merging spaces to critique conventions of the art world. Each booth of the fair addressed larger sociocultural problems such as childhood and identity, while the fictive setting of the fair subverted the social hierarchy of artists and artworks found in commercial art fairs. Their success was further recognized by their appointment as the curators for the 15th Istanbul Biennial in 2017.

Based in Berlin, Elmgreen & Dragset have exhibited at numerous venues including Museum Haus Lange, Kunstmuseen Krefeld, Germany (2017); Tel Aviv Museum of Art, Israel (2016); Statens Museum for Kunst, Copenhagen (2014); Victoria & Albert Museum, London (2013–2014); Tate Modern, London (2004); and Kunsthalle Zürich (2001). In 2000, they were nominated for the Hugo Boss Prize, in 2002 they won the Preis der Nationalgalerie at Hamburger Bahnhof, Berlin, and in 2009 they were awarded Special Mention at that year's Venice Biennale for their effort as curators.

Since taking up the role of director at Ullens Center for Contemporary Art (UCCA) in Beijing in 2011, Philip Tinari has increasingly become known as one of the leading experts on contemporary C

We aim to call attention to the standardised format of art fairs and we want to see how people will adapt their behavioural patterns when entering our fictional art fair within the context of the museum.

Subversive humor is at the heart of Michael Elmgreen and Ingar Dragset’s widely divergent contemporary works that often include the transformation of architectural spaces and sculpture. The

The sculptures of artist-collaborators and former lovers Michael Elmgreen and Ingar Dragset have always reflected upon the company they keep, from the biennial circuit to the art fair jet-set, casting

There's a nice-looking bar at Elmgreen & Dragset's new show, Adaptations, at the Kukje Gallery in Seoul, South Korea. It's white, oval shaped, and is fitted with two bar taps, and looks pretty invitin

Be among the first to know when new artworks and exhibitions by Elmgreen & Dragset are added to Ocula.
Sign UpLogin