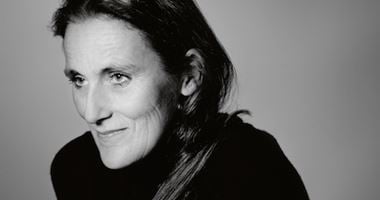 Fabienne Verdier uses space to capture the intrinsic forces of life in a perfect stroke. It is a complete dialogue through the chosen spiritual elements transcending to the material world that drives her creations. The cosmic power of existence is expanded through her art in a philosophical manner at a given instant, beyond boundaries. Verdier works vertically using gravitational forces as tools to enhance the transmission of the matter through movement, captured into a moment’s time in the essence of equilibrium. Painting with animal brushes such as horsehair or rooster feathers, her instruments funnel energy onto the work from their own living spirit. The canvas arena is occupied by incandescent colors that bring the artist back to her western sparkle and black, to the ultimate power: “the color by which all is materialized”. Ten years in China working with masters in traditional ink painting and a lifetime of inspiration through the icons of art history, have led the artist’s innate East-West spirit to be driven by the quest of oneness with the universe.

Click Contact Gallery under any Featured Artwork by Fabienne Verdier to receive information on price and availability.