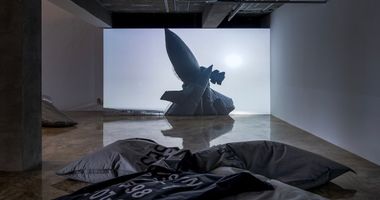 Fiona Banner, also known as The Vanity Press, is a British artist who works across language, sculpture, installation, performance, and found paintings to interrogate the complex nature of image and communication.

Fiona Banner emerged in the mid-1990s with her 'wordscapes' or 'still films'. Top Gun (1994), her first wordscape, is a detailed frame-by-frame description of the eponymous 1986 film on an almost five-metre-wide length of paper. Writing in her own words, the artist examined the theatrical techniques that cause certain scenes to be dramatised and made heroic in movies and, subsequently, in popular culture.

Typically concerned with war and pornographic films, Banner's wordscapes examine the ways in which scenes of violence and nudity attract or repel. Arsewoman in Wonderland (2001), a transcription of a pornographic film written in pink ink, was nominated for the Turner Prize in 2002 amidst public outcry.

Continuing her exploration of written modes of communication, Fiona Banner established her own printing house, The Vanity Press, in 1997. Its first publication that year, titled THE NAM, comprises a 1000-page description of Vietnam war movies including Apocalypse Now, The Deer Hunter, and Full Metal Jacket. Through texts describing eleven hours of film, the artist contemplates the limits of written language and the excess of imagery in contemporary times.

The Vanity Press publications are, at times, beyond the form of traditional books. The 'book' Summer 2009 (2009) is a piece of paper marked with an ISBN imprinted by the sun, while GODS WITH ANUSES (ISBN 978-1-913983-05-5) is a rearview mirror with ISBN digits painted over it.

Fiona Banner's works with fighter planes consider the objects of war as alluring objects. For her 2010 Duveens Commissions at Tate Britain, London, the artist installed two decommissioned fighter planes in the Tate Britain's Duveen Galleries. Collectively titled Harrier and Jaguar (2010), one of the jets was adorned with markings to resemble a falcon and the other revealed a reflective surface underneath its paint.

In her film Pranayama Organ (2021), Banner and a performer dress themselves as inflatable fighter planes and stage a series of humorous yet dark movements that evoke courtship and combat. A pipe organ plays in the background, alluding to the human body and its relationship to the exploitation of nature.

The full stop is among the most consistent of Banner's motifs, which for the artist represents both an ending and a beginning. In her 1997 sculpture Neon Full Stop, the punctuation mark is a small neon light mounted on top of wires. A group of polystyrene sculptures entitled Full Stops (1998) presents a number of full stops, their shape dictated by their font style.

P E R I O D (2019) is an installation that presents a large ship fender together with Banner's full stop paintings on found images. In works such as Helvetica, Ellipsis, and Optima, Nuptial (all 2019), the artist blocked out the vessels and ships in the original paintings with full stops. Much like the ambiguous full stop, the ocean in P E R I O D and its full stop paintings carry conflicting and uncertain connotations of new encounters, migration, and invasion.

In 2020, Banner worked with the environmental organisation Greenpeace to install a 1.5-tonne granite rock sculpture in front of the Department of Environment, Food and Rural Affairs (DEFRA) in London. Shaped like the full stop in the font Klang, Banner's work protested seabed destruction by illegal fishing in the North Sea. After an hour of its installation, the sculpture had been removed—ironically swift considering DEFRA's lack of action concerning the issue.

Two other full stop sculptures titled Peanut and Orator (both 2020) were later dropped by Greenpeace's ship into the sea along with other rocks to prevent boats from dredging the floor.

Banner was elected a Royal Academician in 2017.

At Barakat Contemporary in Seoul, Fiona Banner, aka The Vanity Press, reflects the 'powerlessness of a human annus horribilis'.

Be among the first to know when new artworks and exhibitions by Fiona Banner are added to Ocula.
Sign UpLogin