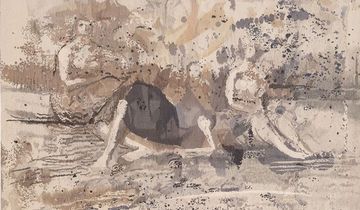 A coal miner's son, Moore first showed artistic talent at Castleford Secondary School. In 1919, after fighting and being injured in the First World War, he got an ex-serviceman's grant to enroll at Leeds School of Art. There, Moore became friends with another modernist sculptor, Barbara Hepworth. In 1921 they both got scholarships to study at the Royal College of Art (RCA) in London. On their visits to the British Museum, Moore often examined the ethnographic collection.

In 1924, he began teaching at the RCA while making commissions and working in his studio. Five years later he married Irina Radetsky, a painting student, and moved his studio to Hampstead Heath. The Moores' neighbours included Hepworth, her husband Ben Nicholson, artists Naum Gabo and Roland Penrose, and critic Herbert Read.

In 1932 Moore took up a post at the Chelsea School of Art. In 1939 he met art historian Kenneth Clark, who began to champion and commission his work. With Clark's encouragement he also produced drawings of coal miners and—during the war—families in underground tube stations sheltering from the Blitz.

In 1924 Moore got a six month travelling fellowship to Northern Italy Paris. At Paris' Trocadero Museum, he encountered a plaster cast of a reclining stone Chac Mool figure, a pre-Columbian Mayan sculpture that astounded him, and which he had seen two years earlier reproduced in a book on Mexican Art. From it he developed a formally rectangular, blockish structure in which a carved figure was positioned, such as Reclining Figure (1929) or Reclining Woman (1930). In the late thirties these became more abstract, elongated with holes, such as the elmwood Reclining Figure (1939).

Reclining or seated figures (or standing mother and child) were a dominant theme in his sculptures and distinctive drawings using crayon, chalk, watercolour and gouache. A good example is the bronze, Draped Seated Woman, 1956-7.

Moore's sinuous abstract sculptures were influenced by the works of earlier and contemporary artists, among them Picasso, Jean Arp, Joan Miró, and Constantin Brancusi. Also significant were elements of nature, particularly the austere rotund hillforms of his native Yorkshire. Often the body parts were disconnected and separated to accentuate the geological as curvilinear abstraction. Examples include Composition (1931) and Two Large Forms (1969).

Moore's friendship with Surrealists like Roland Penrose and admiration for Picasso led him to explore bronze casting and fluid and figurative anthropomorphic forms wrapped around or 'framing' holes. It enabled large sculptures to be positioned outside. In works such as Reclining Figure (1938) and Ideas for Sculpture in Metal (1939), Moore investigated the expressive possibilities of apertures while retaining the same, tuber-like quality for his figures with a reduced head and rubbery, writhing torso or limbs.

In the mid seventies Moore executed a small series of ink and watercolour figure drawings intended to be made into tapestries by five master weavers at Tapestry Studio, West Dean College. Moore was so fascinated by the results and the process of 'translation' where the weavers themselves picked the colours, dyes, types of wool and quality of greatly enlarged lines and stains, that he did seven more. Several were purchased by the Victoria and Albert Museum, and later sent to Christchurch Art Gallery for an exhibition in 1981. In 2021, art gallery Hauser & Wirth presented tapestries from the late seventies in Hong Kong.

Henry Moore exhibited internationally during his lifetime, with solo presentations including his representation of the United Kingdoms at the 24th Venice Biennale, for which he was awarded the Sculpture Prize (1948); Sculptures and Drawings of Henry Moore, Tate, London (1951); and Henry Moore, Forti di Belvedere, Florence (1972).

The Henry Moore Foundation, established in 1977 by the artist, preserves his legacy while supporting contemporary sculpture projects and programmes.

Advisory Perspective ‘Prints are a way in’: Inside the Home of Collector Tim Sayer 3 February 2022

At Tim Sayer's art-packed home in north London, a reward is offered upon every glance.

The exhibition at Hauser & Wirth marks the first time these works have been shown in Asia.

Nature was always at the heart of [Henry Moore][0]'s artistic vision. Throughout his career his unique and innovative visual language was based on the reinterpretation of organic forms, be they the hu

For the third edition of TEFAF’s Curated section, Penelope Curtis, director of Lisbon’s Museu Calouste Gulbenkian, explores the theme of the recumbent or reclining figure in art.

Now in their 90s, art patrons Wilfred and Jeannette Cass have opened their most ambitious exhibition ever. A Beautiful Disorder, on show at the Cass Sculpture Foundation in Sussex features the monumental works of 18 leading Chinese artists.

The bronze plume of Henry Moore’s Nuclear Energy (1964–66) stands a mile to the west of Lake Michigan, atomic vapour frozen solid in the shore wind. It occupies a bare plaza in the middle of the University of Chicago, surrounded by residential halls and faculty buildings. ‘Occupies’ is the right word: Moore’s monument...