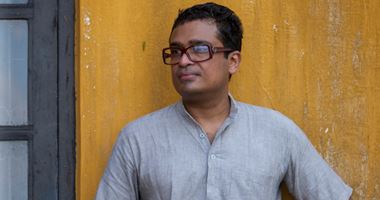 In Jitish Kallat's diverse practice encompassing painting, sculpture, video, photography, and installation lies an engagement with the urban city, and the ideas of time and the astral.

Jitish Kallat held his first solo exhibition, PTO, at Chemould Prescott Road, Mumbai, in 1997. Many of his early works employ personal and found photographs to portray the various faces of Mumbai in flux. In the painting Quarantine Day (2003), for example, close-ups of anonymous individuals are rendered in a mute palate, with an emphasis on shadows, against a dark red background.

Jitish Kallat's monumental installation 365 Lives (2007) utilises magnified images of cars instead of human figures. Numbering 365 in total, the images that make up the installation capture the rapidly changing city and the mobility of the Indian middle class in the 1990s and early 2000s.

Throughout his practice, Jitish Kallat has rearranged historical texts and speeches to invoke powerful contemplations about human violence and peace. Public Notice (2003)—the first in the 'Public Notice' trilogy (2003–2010)—features reproductions of Jawaharlal Nehru's 'Tryst with Destiny' speech that was delivered on the eve of India's Independence in 1947. Kallat traced each letter in adhesive then set it on fire in a protest against the Indian government's actions during and after the Gujarat riots of 2002.

Public Notice 2 (2007) similarly altered each letter of Mahatma Gandhi's 1930 Dandi March speech. In that famous speech, the political leader called for a complete but peaceful civil disobedience. For the artwork, Jitish Kallat rendered the speech in resin bones in a chilling portrait of violence even as its content mediates peace.

The microscopic and macroscopic, and the banal and cosmic often blur into each other in Jitish Kallat's works. Epilogue (2010–2011)—a large-scale installation consisting of prints—shows 22,889 moon phases that the artist's father saw in his lifetime. Up close, the moons are revealed to be roti: a flatbread widely eaten in India.

The suite of photographs in Jitish Kallat's 'Sightings' (2015) are colourful and evocative of celestial bodies and the galaxies. They are, however, magnified shots of fruits. Kallat's inspiration for the work came from his experience as the artistic director of the 2014 Kochi-Muziris Biennale when during the preparation for the Biennale he ate a fruit platter every morning.

Whorled Explorations, the main exhibition of the 2014 Kochi-Muziris Biennale, opened with Powers of Ten (1977): a seminal video by Charles and Ray Eames that examines the relativity of scale by zooming out to space then into a carbon atom that forms the human body. As Kallat told Ocula Magazine in 2015, for him the video is a way to contemplate 'your own diminutive self in the universe whilst also revealing to you the vastness of yourself'—a theme that is also examined in his work.

Various Jitish Kallat works rely on chance to record interactions between nature and science. For 'Wind Study (Hilbert Curve)' (2017), Kallat made drawings of the Hilbert Curve—an infinitely space-filling curve first used by the German mathematician David Hilbert—in adhesive and set them aflame. The resulting marks, resembling constellation maps or navigation charts, were determined by the wind present at the time.

Similarly reliant on chance, 'Rain Study (The Hour of the Day of the Month of the Season)' (2016–2018) is a record of rain—during monsoon season, the artist placed watercolour drawings outside, and the splotches from rain droplets created star-like dots.

With [Frieze New York][0] returning to Randall's Island Park from 4 to 6 May 2018, Ocula is on hand to offer a selection of exhibitions around the city, from Bushwick and the LES to Chelsea, Midtown a

Here After Here, for the first time, brings under a single exhibition over 25 years of the prolific and varied Indian contemporary artist Jitish Kallat's artistic practice. It is comprehensive and e

Read More
Related Press India Art Fair 2017: All the Flowers Are for Everyone 10 February 2017, OPEN Magazine

The India Art Fair (IAF) is usually a maze. Even with a map in hand and a purpose in mind, one can easily get lost or distracted. Often one meanders while trying to locate that elusive booth, which on

Despite shows in Delhi and Mumbai, and his bold artistic direction of the second edition of India's Kochi-Muziris Biennale, Jitish Kallat's global success has not been fully appreciated at home. Sever

As a prelude to Asia Contemporary Art Week 2018, ACAW presented a wide-ranging discussion with internationally noted, Mumbai-based artist, Jitish Kallat, on the occasion of his exhibition "Decimal Poi

Sign up to be notified when new artworks and exhibitions by Jitish Kallat are added to Ocula.
Sign UpLogin