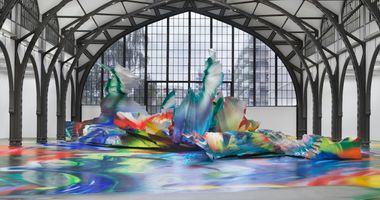 In Katharina Grosse's practice, there is no distinction between painting, architecture, and sculpture. Paint explodes beyond the traditional canvas onto walls, building exteriors, stretches of folded or draped fabric, objects, and even the landscape itself. Noted for her use of the spray gun to apply paint onto surfaces, often in big sweeps that recall graffiti art, Grosse creates a sensorial encounter with colour, scale, and dimensionality.

Grosse's early paintings from the 1990s—many of them untitled—often feature a single plane of colour on canvas. In one such artwork from 1996, the plane is divided into four roughly equal parts, respectively painted in green, blue, light brown, and brownish yellow (clockwise). It was around this time that Grosse began to paint directly onto architecture; in 1995 she painted sections of the walls at Telekomgebäude, Wesel, in red, blue, and various shades of yellow. Her first work made using the spray gun was Untitled (1998), for which the artist spray-painted dark green onto an upper corner of a gallery in the Kunsthalle Bern, Switzerland.

Later, Grosse introduced soil and debris into her work, spraying paint over the various surfaces of the canvas, architecture, and surrounding environment. At her solo show Construction à cru at Paris' Palais de Tokyo in 2005, for example, she installed piles of soil along the white walls of the gallery, spray-painting them together with the nearby walls and floor. Grosse also made a painting onsite, purposely letting the saturated colours venture off the canvas onto the wall on which it was mounted. She moved the work when done, propping it against the same wall where the white negative space from its creation remained.

In an interview with Ocula Magazine in 2019, Grosse explained that she paints over 'the border of objects and architectural settings in order to expand the area rather than close it off.' For the artist, borders are 'spaces of negotiations that have to be created again and again', and her works provide means to rethink the restrictive nature of those boundaries.

Grosse often employs cardboard and foam stencils to make these paintings, including the 16 large-scale works shown in her eponymous solo exhibition at Gagosian, New York, in 2017. Although Grosse reuses her stencils, the paintings that share similar or identical compositions appear pronouncedly different because she spray-paints in different colour schemes every time. In one painting, a seahorse-like form in shades of brown, blue, purple, white, and peach, with neon green around its edges, sits against a white background, while another painting made using the same stencil features a background of overlapping red, blue, and white. In another solo exhibition—Wunderbild at the National Gallery in Prague (16 February 2018–31 March 2019)—she used similar stencils to create fabric banners suspended from the ceiling.

Over the past years, Grosse has experimented with creating immersive installations that respond to the architectural surroundings.

For her participation in All the World's Futures, a group exhibition curated by Okwui Enwezor for the International Exhibition of the 56th Venice Biennale, Grosse transformed the Arsenale into a site-specific installation comprised of styrofoam sculptures, dirt, rocks, and long sheets of fabric falling from the ceiling. All were spray-painted, each gesture wild and sizeable. In The Horse Trotted Another Couple of Metres, Then it Stopped (2018), commissioned for Carriageworks, Sydney, more than 8,000 square metres of fabric was hung from the ceiling, the folds and twists of the material creating multiple dimensions, a forest of colours that seamlessly bled from the sky to the ground.

Grosse's often monumental contemporary art installations stimulate an awareness of the human body and its scale in relation to its surroundings. Mumbling Mud (2019) saw the artist subdivide the massive space of chi K11 art museum—located in the basement of K11 Art Mall in Shanghai—into five sections, each centring around a large-scale installation. 'Underground'—the first zone and the entry into the exhibition—consisted of spray-painted building waste, soil, and urban detritus; 'Ghost' featured a gigantic white rock made of styrofoam, its horizontal slabs recalling the rocks from Chinese literati painting; 'Stomach' engulfed the visitors in its maze of fabrics hanging from the ceiling. Despite their bright colours, a sense of anxiety loomed in the works' colossal size and consistent reference to unending urban development in the contemporary world. In her interview with Ocula Magazine, Grosse said that 'with my painting, I seek to cause vehement agitation. I want the viewer to be so disturbed—positively or negatively—that they develop the wish to change something. I want to stimulate radical empathy.'

In 2020, Katharina Grosse presented large-scale installations paintings in her solo exhibitions at the Baltimore Museum of Art (BMA) and Hamburger Bahnhof, Berlin. At the BMA, Is It You? revolved around an expansive installation by the same name, which consisted of spray-painted clothes that spanned across the walls of the exhibition space. It Wasn't Us, presented in Berlin, included paintings inside as well as the exterior of museum building, providing an alternative to the conventional viewing experience that is confined to ordered galleries.

Grosse's paintings have come to adopt the urban and natural landscape as their canvases as well. In 2014, the City of Philadelphia Mural Arts Program commissioned Grosse to transform the scenery along the city's train tracks. Titled psychylustro, the artist spray-painted orange, pink, and green in graffiti-like gestures over weeds, piles of rubble, warehouses, and iron trestles, among other items.

The borders of her colours encompassed both the interior and exterior of a building in 2016, when she spray painted an abandoned army aquatics facility in Fort Tilden Beach, New York. The project was a part of the 'Rockaway!' series, initiated by MoMA PS1 to celebrate the Rockaway Peninsula as it continues to heal after Hurricane Sandy in 2012. Grosse splattered red and white paint over the ground immediately outside the building, as well as on and in the building itself.

Site-specific works appear in unusual locations including a gunpowder cellar and a dilapidated schoolhouse.

To juxtapose the work of Katharina Grosse and Tatiana Trouvé, artists whose directions are different but not altogether contrary in background, influences, and means, triggers new visual short circuit

The inaugural ARoS Triennial, The Garden—End of Times; Beginning of Times, opened in Aarhus, 2017's European Capital of Culture, on the morning that Donald Trump stood in the White House garden and

Read More
Related Press The year in, and beyond, the galleries of New York: A relatively concise chronicle of highlights and a top 10 list 23 December 2016, ARTnews

Not so long ago, it seemed that new galleries would keep sprouting up forever in New York, and that existing ones would keep on expanding. Over the past 12 months, though, some have closed. Growth has

Sign up to be notified when new artworks and exhibitions by Katharina Grosse are added to Ocula.
Sign UpLogin