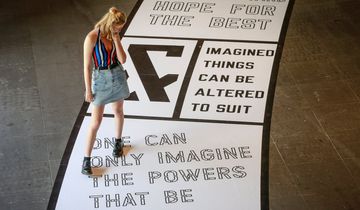 Contemporary American artist Lawrence Weiner is recognised as a pioneering figure of Conceptual art. Using language as a primary material, Weiner challenged the conventional notion of the artwork as a visible and tangible object. He also aimed to disrupt the authority of the artist by claiming that the realisation of an artwork lies with the viewer.

Born in Manhattan and raised in the South Bronx, Weiner moved around the country and took on different jobs as a young adult. In San Francisco, he produced his first major work, the earth-based Cratering Piece (1960), which saw the artist detonate explosions in a field in Mill Valley. Weiner's attempt to 'make sculpture by removing things', as he told Vice in a 2017 interview, would also provide a pivotal entry into his later text-based works.

Lawrence Weiner's text-based installations and works on paper typically show the phrases and sentences described in their titles, which range from instructions to enigmatic observations. Weiner described his works as 'language + the materials referred to', emphasising the role of language as a material for construction in his practice.

In 1964, Weiner began exhibiting with Seth Siegelaub's gallery in New York City, a relationship that witnessed a number of significant developments in his practice.

These include A series of stakes set in the ground at regular intervals to form a rectangle with twine strung from stake to stake to demark a grid—a rectangle, removed from this rectangle, an outdoor installation presented as part of an exhibition Siegelaub organised at Windham College in Putney, Vermont in 1968. The work was constructed in a field used by football players, who unknowingly cut down the twine; instead of viewing the incident as a destruction of his piece, however, Weiner decided that the description of the artwork—in the title—could provide the viewer with an adequate experience of the artwork.

Following A series of stakes, Weiner continued to use text in place of the art object to create artworks. Statements (1968), an artist's book published by Siegelaub, contains 24 text-based pieces including Declaration of Intent, which laid out the principles of his subsequent works and became influential in Conceptual art.

According to the declaration, 'the artist may construct the piece', but 'the piece need not be built'. In this scenario, the artist does not necessarily create the artwork; it is the viewer who may assume that responsibility. Many of Weiner's text-based works are indeed instructions for a process, such as Many Colored Objects Placed Side by Side to Form a Row of Many Colored Objects (1982), in which capitalised letters in blue appear diagonally across white background, framed by black lines.

Weiner also worked with film, which he considered to be a collaborative practice, as the artist revealed in his 2020 conversation with musician and friend Kim Gordon. His collaborators include director Kathryn Bigelow, whom he first worked with in the 1970s, as well as Michael Oblowitz and Gerrit Hilhorst.

Like his text-based works, Weiner's films and videos subvert the conventions associated with the film-viewing experience. Done To (1974), for example, a short film produced with Bigelow, contrasts footage of a woman's face and two women sitting side by side with an audio track consisting of a conversational female voice and strict, almost robotic male and female voices, preventing the viewer from constructing a cohesive narrative from the work.

An internationally recognised artist, Lawrence Weiner exhibited his work at major institutions and galleries. In the 1960s and 70s, his work was included in landmark exhibitions of Conceptual art, including Live in Your Head: When Attitudes Become Form, Kunsthalle Bern (1969); Information, Museum of Modern Art, New York (1970); and Documenta 5, Kassel (1972).

In 2007, the Whitney Museum of American Art, New York and the Museum of Contemporary Art, Los Angeles jointly organised the major retrospective exhibition Lawrence Weiner: AS FAR AS THE EYE CAN SEE 1960—2007, which traveled to K21 Kunstsammlung Nordrhein-Westfalen, Düsseldorf in the following year.

View All (13)
Related Press 8 Must-See Exhibitions This Week, From Toronto to São Paulo and Beyond 3 February 2020, Surface

Ahead of documenta 14 opening in the city this week, a guide to the other shows and projects happening around town.

Holzer will be the fourth major contemporary artist, and the first woman, invited to add a new twist to Blenheim Palace's historic interiors and grounds.

Be among the first to know when new artworks and exhibitions by Lawrence Weiner are added to Ocula.
Sign Up Login