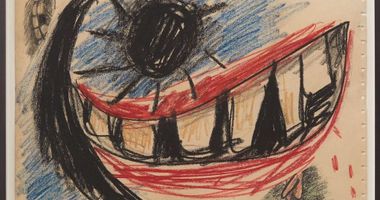 Lee Lozano experimented with various styles, from her early cartoonish drawings and paintings to later minimalist works on canvas, as well as performative pieces that were often intimately entwined with her private life.

After completing her studies at the Art Institute of Chicago in 1960, Lozano settled in New York, where she befriended numerous intellectuals and artists including Sol LeWitt and Carl Andre.

Images of hardware tools recur throughout Lozano's early works from this decade, among them screwdrivers, hammers, bolts, and drills, that morph into or mix with phallic or vulva-like forms. Rendered in crayon, pencil, or oils in a bold, comic-book style, these overtly sexual paintings and drawings have been compared to the work of Philip Guston, Claes Oldenburg, and Peter Saul.

Between 1968 and 1972, Lozano documented private affairs and thoughts, daily interactions, and instructions for her artworks and exhibitions in notebooks, calling these texts 'drawings' and expanding beyond the physical art object as a work of art. 11 of Lozano's private notebooks survive, which have been posthumously published as Private Books.

Among Lozano's text-based drawings or 'Language Pieces' is Dialogue Piece, begun in April 1969, that saw the artist invite people whom she 'might not otherwise see for the specific purpose of inviting them to your loft for a dialogue.' No physical evidence of the dialogues, however, exists—as Lozano prohibited recordings or notes—leaving the work to be an ephemeral, conceptual happening existing apart from the written instructions.

In the late 1960s, Lozano also began General Strike Piece, which saw the artist gradually distance herself from the New York art world by ceasing to visit museums and galleries. Her performative strike peaked with Dropout Piece when, in 1982, Lozano retired completely from engaging in public art world events and moved to Dallas, Texas, where she lived until her death in 1999.

Lozano's boycott of the art world overlapped with another boycott piece, in which she refused to speak to women for the rest of her life. In an essay for Karma gallery, art historian and curator Helen Molesworth interprets Lozano's rejection of the art world and women as a rejection of systems—capitalism and patriarchy—an act that demonstrates 'that the systems are linked, interdependent, and mutually beneficial.'

Although little is known about Lozano's artistic practice in Dallas, her works continue to be exhibited widely. In 2004, New York's MoMA PS1 organised Lee Lozano: Drawn from Life 1961—1971, the first major solo exhibition of her work since her death.

Lee Lozano began exhibiting in the mid-1960s and continued to do so after her 'boycott' of the art world and move to Dallas in 1982, though less frequently than she had while still in New York. A renewed interest in Lozano in the years following her death has led to numerous solo and group exhibitions featuring her work. Hauser & Wirth has organised solo exhibitions of Lozano's oeuvre since 2007.

Sign up to be notified when new artworks and exhibitions by Lee Lozano are added to Ocula.
Sign Up Login