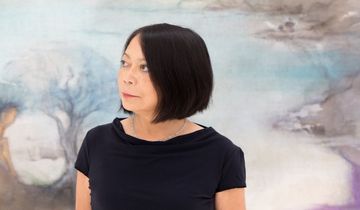 Japanese-Swiss artist Leiko Ikemura is known for her paintings and sculptures that address the fluid relationship between man, nature and our cosmic existence.

Ikemura was born in Tsu, Japan. She studied at Osaka University between 1970 and 1972 and later on left to study in Spain at the Real Academia de Bellas Artes de Santa Isabel de Hungría, Seville between 1973 and 1978.

Ikemura went on to practice her painting and sculpture in Europe, most notably in Zürich and Cologne. Between 1990 and 2016, she taught at the Universität der Künste, Berlin and since 2014 has been teaching at the Joshibi University of Art and Design in Kanagawa, Japan.

Leiko Ikemura approaches her paintings with hazy and dreamlike forms, allowing the viewer to make their own interpretations of her landscapes and deteriorating portraits. These paintings often contain a muted colour palette, as the artist works through faded shades of yellows, blues and reds.

In a style similar to her sculptural work, Ikemura uses her paintings to combine several animal forms. In Moo (1993), her title suggests a cow-figure, but instead viewers are met with an amalgamation of several other animals—perhaps a frog, bird and/or dog—blurred together. Through this process, she interrogates the borders that separate beings, animals and humans.

In her solo exhibition at Kunsthalle Rostock, Germany (2012), Ikemura questions the boundaries between Western and Eastern cultures. Her landscapes in this exhibition seem to take cues from Eastern tradition while also incorporating the sensibilities of Western painting, drawing on harsh shadows and impressions to create depth while integrating muted colours and shades.

Ikemura's trajectory of blurring boundaries between forms and species can explicitly be seen through her sculptures involving the usagi, or mystical rabbit. In these bronze-cast sculptures, Ikemura merges the image of a rabbit onto figures of women. Usagi Kannon (2012/19) is a three-metre towering sculpture of a woman with rabbit ears who seems to be deep in thought in prayer. This sculpture, created in response to the 2011 Tōhoku earthquake and subsequent Fukushima nuclear accident, allows guests to take refuge beneath its skirt.

Ikemura has also worked with different media such as terracotta and glass. In her terracotta sculpture, Fuji-Face (2012), she sculpts Mt. Fuji onto the profile of a sleeping head. She has several other works in this series in which she attaches trees, volcanoes and lakes onto this sleeping figure. These works point towards the interconnectedness of man and nature, being and non-being and our shared cosmic existences.

The artist has held solo exhibitions at The National Art Center, Tokyo; Kunstmuseum Basel; Asian Art Museum, Berlin; Nevada Museum of Art, Reno; and the Sainsbury Centre, Norwich. She has been included in group exhibitions at The National Museum of Modern Art, Tokyo; Museum on the Seam, Jerusalem; and the Princessehof National Museum of Ceramics, Leeuwarden. Her work has been collected by renowned institutions such as the mumok — Museum moderner Kunst Stiftung Ludwig Wien, Vienna; the Centre Pompidou, Paris; and the Hara Museum of Contemporary Art, Tokyo.

Leiko Ikemura shares her approach to materials, including her most recent glass sculptures on view at ShugoArts in Tokyo.