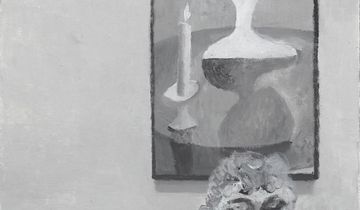 Geerk was born in Basel, Switzerland in 1988. He completed his education at the Kunstakademie Düsseldorf under the mastership of Siegfried Anzinger and Lucie McKenzie. He currently lives and works in Düsseldorf, Germany.

Working often with acrylic on canvas, Geerk uses traditional Western painting techniques to create captivating, often disquieting compositions. The figures in his paintings evoke human emotion and the psychological, set within a monochromatic background, jarringly divorced from any specificity of time or place. He uses a simplified colour palette to create this sense of atmosphere and emotion in his unsettling canvases.

The dreamlike and ambiguous nature of his paintings are reminiscent of modernist artists such as metaphysical painters and the Surrealists. Possible comparisons include Rene Magritte and Giorgio de Chirico, who also used naturalistic painting techniques to create bizarre scenes interrogating the human psyche. He has also been compared to important German artists, such as Ernst Ludwig Kirchner and Rudolf Schlichter.

Like these impactful painters, Geerk's practice has proved popular, earning him a place within prestigious collections such as that of the Kunsthaus Zurich. Often suggestive of a strong inspiration from great painters in Western art history, Geerk's painting in this collection, entitled Sculptor with Model and Sculpture II (2020), is a gender-swapped take on Picasso's The Vollard Suite, interrogating the relationship between artist, artwork, and model.

Geerk's material of choice is acrylic paint, which dries on wool canvases to create a matte glaze. He then works another layer of paint on top to create contrast, breathing life into his sombre figures. This atypical combination of acrylic and wool produces an effect that lends itself to the subdued atmosphere of the paintings.

The haziness created by the paint application is juxtaposed with the sharp lines and shapes with which he builds his figures against geometric backgrounds. This is especially evident in his Table Portraits (2018) series, in which heads are propped on brightly coloured tables, at such odd angles that the viewer is left to wonder whether these figures are dead or alive.

A sense of sleeplessness and anxiety pervades the paintings, influenced by Geerk's own insomnia. Although he takes inspiration from his own emotions and experiences, his references are limited by the fact that he does not paint from models or from photographs. Rather, his figures emerge from an interest in the mundanity of daily life and keen observation of subtle moments, such as passing glances or expressions. Many figures appear trapped with indecision or insecurity, standing hesitantly near doors or doorways.

These characters exist in limbo—neither in reality nor a dream, not living nor dead, coming nor going. In these carefully rendered compositions, Geerk reflects the anxiety and ennui of modernity. They appear as a still in a longer narrative on the human condition.

Lenz Geerk has been the subject of both solo and group exhibitions.

Articles on Lenz Geerk have been published in various publications, including Artforum, Artillery, and Contemporary Art Review.

Roberts Projects participated in EXPO CHGO ONLINE with a series of black and white acrylic on canvas works by Lenz Geerk. ⁠⁠