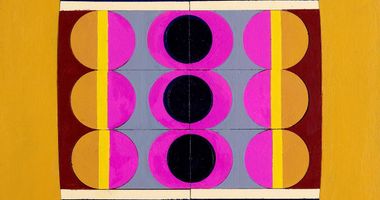 Through her often vibrantly coloured ceramics, paintings, and works on paper, Lubna Chowdhary explores the intersections of culture and identity, personal and collective histories, and traditional and industrial processes.

Lubna Chowdhary encountered ceramics while attending Manchester Metropolitan University. Despite her initial reservations about the medium, which has been considered 'a crafty, feminine pursuit' as the artist said in a 2018 interview with Verve Magazine, she became drawn to its malleability and possibilities for colour. Chowdhary went on to receive a master's degree in Ceramics from London's Royal College of Art in 2001. There, studying under sculptor Eduardo Paolozzi, she also developed interests in multiple disciplines and processes that have continued in her practice.

Begun in 1991 and completed in 2019, Metropolis is representative of Lubna Chowdhary's practice in its vast assortment of colour and forms. The 1,000 miniature handmade clay sculptures in the work draw from architectural and ornamental traditions across the world, reflecting both the artist's engagement with history, urban city, and design, and her background—Chowdhary was born in Tanzania to South Asian parents, then moved to England as a child.

Metropolis was first presented at Victoria and Albert Museum, London, in 2017—where Lubna Chowdhary was a V&A Ceramic Resident—before travelling to India for the Kochi-Muziris Biennale in the following year and the Jameel Arts Centre in Dubai.

Although Lubna Chowdhary is primarily known for her ceramic works, she does not consider herself solely as a ceramicist. Stephanie Bailey observed in Ocula Magazine that central to the artist's practice is 'a dynamic interplay of the industrial and hand-made,' as in the case of Code Switch, her solo exhibition at Jhaveri Contemporary, Mumbai, in 2021. The title, which derives from the alternation between languages, cultures, and identities, extends to Chowdhary's experimentation with different techniques and mediums beyond ceramics.

'Code' (2020), one of the three series presented at Code Switch, consists of paintings depicting interlocking shapes that the artist first designed digitally then cut using industrial means. 'Sign' (2021), which used ceramic tiles instead of painted boards, underwent a similar process. A second painting series, 'Switch' (2021) turned to mass-produced, commercial stickers—Chowdhary hand-painted each sticker in varying shades of red, then applied them to grid paper in geometric layouts.

Lubna Chowdhary's exploration of colour, geometries, and design has also been realised in public spaces. Among them are the Lantern Tower (2007), commissioned for Slough, in which vividly coloured tiles branch off a central orb of circles and lines in reference to the town's diversity, and the pavement tiles for Market Square in Brentford, London (2014), which won two Landscape Institute Awards. In Interstice (2021), designed for 100 Liverpool Street, 20 panels capture the impressions of hues and shapes seen from a train carriage in motion.

Discover Metropolis, an installation of over one thousand handmade clay sculptures made by former V&A Ceramics Resident Lubna Chowdhary.

Be among the first to know when new artworks and exhibitions by Lubna Chowdhary are added to Ocula.
Sign UpLogin