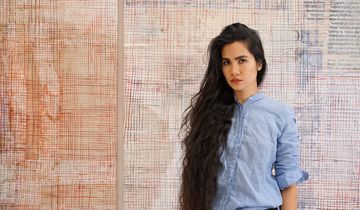 Born in Selangor in Malaysia in 1985, Mandy El-Sayegh moved to the United Kingdom with her family at the age of five. In 2007 she received her BFA from the University of Westminster in London, followed by a Royal College of Art MFA that was centred on painting, but the artist has since expanded her contemporary art practice to writing, installation, and drawing.

El-Sayegh is concerned with the part-to-whole relations in philosophy and science, and how fragments of information can be re-formed to generate new meaning. Her practice is inherently fluid, involving processes of layering, erasure, and obfuscation. These processes are at play in the artist's ongoing 'Net-Grid' series, started in 2010, in which fragments of writing and images can be seen through layers of paint that have been applied using the wet-on-wet technique so that each layer absorbs into the next. On top, a hand-painted grid further obscures the layers while 'holding in' the information beneath—a literal reference to a net, and the act of catching something.

El-Sayegh's 'Net-Grid' paintings appear as cohesive compositions from afar; however, close up, elements appear sectioned off from each other by the grid. This micro-to-macro dynamic is at play across the artist's practice. Exhibitions of her artwork often include vitrines of what she calls her 'archive'—objects and images that mirror the composites of her paintings. In the artist's first institutional solo exhibition in the United Kingdom at Chisenhale Gallery, titled Cite Your Sources (12 April–9 June 2019), objects and images in vitrines included bars of Imperial Leather soap and iPhone cases, their display addressing the process of categorisation. Also on view in the exhibition were pages from the Financial Times, applied directly to the walls and floor of the gallery and overlaid with inscriptions in English and Arabic, along with maps and schematics. The pinkish hue of the paper recalled the tone of human flesh and the body's implicit entanglement in global economic, political, and social structures.

In an Ocula Conversation with Para Site deputy director Claire Shea, transcribed from a talk held in advance of the artist's solo exhibition at Lehmann Maupin in Hong Kong (Dispersal, 11 July–23 August 2019), El-Sayegh explains her approach to the show as an interest in 'this idea of an explosion, and a way to kind of start again from that.' This 'reformation of parts', as she calls it, is also at play in her ongoing 'Piece Paintings' (2010–ongoing), which are composed of disparate imagery—the body being a recurring feature—and text, including logos, which, the artist explains, 'have a magical quality that can be likened to witchcraft'.

El-Sayegh was shortlisted for the 7th edition of the Max Mara Art Prize for Women in 2017. That same year, the artist's installation Boundary Work was exhibited at Sharjah Biennial 13, having been commissioned by the Sharjah Art Foundation. The artist's works have been included in a number of group exhibitions, including Ecologies of Darkness at S A V V Y Contemporary in Berlin (2019).

Mandy El-Sayegh talks about the body, fragmentation, and the mutability of language in her work in this discussion with Para Site Deputy Director Claire Shea, which took place ahead of the artist's exhibition at Lehmann Maupin, Dispersal (11 July–23 August 2019).

Thaddaeus Ropac open a solo exhibition of one of Britain's most exciting young painters, Rachel Jones.

Somewhere between dizzying grids, newspaper clippings and a xeroxed copy of a page from a Chinese colouring book is Mandy El-Sayegh's subjectivity. Or was: as the artist says, her subjectivity is a pr

1) Hoarding or collecting? More hoarding—I see collecting as a controlled, conscious, more discerning thing. That's not to say that what I accumulate doesn't have its specificities, more that t

Cite Your Sources, the title of Mandy el-Sayegh’s first solo show in the United Kingdom, presented by London’s Chisenhale Gallery, is a quote from the artist’s former tutor. It nods to the idea that

Sign up to be notified when new artworks and exhibitions by Mandy El-Sayegh are added to Ocula.
Sign Up Login