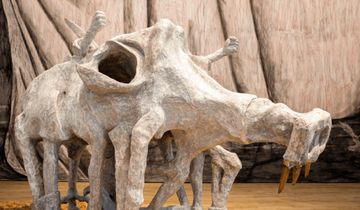 Born in 1974 in Winnipeg, Canada, Marcel Dzama received his BFA from the University of Manitoba in 1997.

While at university, he founded The Royal Art Lodge, a collective of Winnipeg-based artists including Michael Dumontier, Neil Farber, and Jon Pylypchuk. The artists would meet once a week to draw and paint, often producing collaborative work in response to each other's practice. The group became a crucial platform for launching the careers of some of its members.

In 2013, Marcel Dzama produced Une danse des bouffons (A Jester's Dance), a 35-minute film that directly references Marcel Duchamp. Employing a surreal aesthetic, the film is a fictional drama depicting the doomed relationship between Duchamp and Brazilan sculptor Maria Martins. Described by Dzama as a 'Dadaist love story', the artwork is bursting with art historical references.

In addition to his contemporary art practice, Marcel Dzama has worked on costume and stage design for New York City Ballet's The Most Incredible Thing (2016), an ambitious performance based on Hans Christian Andersen's 1870 fairy tale. Dzama also produced an installation to accompany the ballet, titled The tension around which history is built, which was displayed at the David H. Koch Theatre, New York City in 2016.

In the late 1990s, Dzama was discovered by New York gallery David Zwirner, which has represented him since.

The best art to see online from Tuesday 28 April to Monday 4 May.

'Be what you want to be,' Marcel Dzama says of the theme of The Mask Makers, the booth he's curating for David Zwirner at Independent Brussels. 'The mask is freedom, anonymity, a new identity or gen

Read More Related Press Raymond Pettibon keeps drawing over his works at David Zwirner, and other observations this morning in Mayfair 5 October 2016, ARTNews

If it wasn’t already evident that it’s Frieze Week in London, a stroll down New Bond Street would probably tip you off, as there are collectors on nearly every corner talking to dealers with binders, with iPads, and making the sounds of work being sold. There are also long lines at the ATMs in the HSBC branch here on one of...

Gumby, surfers, penises, Batman and Robin, naked ladies with machine guns, Diamond Dogs-era David Bowie, bats and skulls, Charles Manson, dancers in polka dot dresses: These are a few of the motifs that crop up in Forgetting the Hand, a show of collaborative works by artists Raymond Pettibon and Marcel Dzama at David Zwirner Gallery.

New York City Ballet's special Artist Series has come to be one of our favorite artistic collaborations in recent years. From Dustin Yellin to JR and FAILE, the series features special performances and installations created by different artists. This years has us especially excited! Starting January 19th, Marcel Dzama will create a major...

A conversation about instinct in creative practice that nods to punk rock, fatherhood, and the ethics of artistic expression. In the fifth episode of Dialogues, artist Marcel Dzama—known for his wh

Be among the first to know when new artworks and exhibitions by Marcel Dzama are added to Ocula.
Sign Up Login