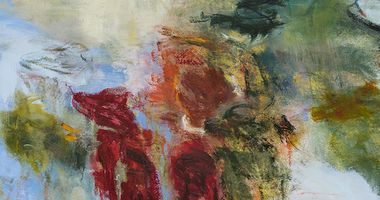 Growing up between South Africa, Brazil, and Canada, Rooney received a BA from the University of Toronto followed by an MA in Fine Arts at Goldsmiths, London, in 2011. She is now based in London.

Megan Rooney's early works, such as those included in her solo show Piggy Piggy at Croy Nielsen, Berlin, in 2016, present speculative fictions that explore tropes of gender using everyday iconography. Cigarettes allude to snakes, for example, and masked, dysmorphic figures were painted over Topshop magazines.

Later that year, in Animals on the bed at Seventeen, London, washed-out, calligraphic, semi-abstract, and glowing paintings stretched well beyond the confines of the canvas, covering the walls of the exhibition space—an immersive technique for which Rooney is now well-known.

Rooney's painting practice is as much predicated on erasure, happenstance, and revision as it is on mark-making. Describing Fire on the Mountain (2019), a monumental wall painting created on-site at Kunsthalle Düsseldorf, Swiss Institute Curator Laura Mclean-Ferris wrote it 'dramatized the creative cycle of layering, grinding away, and layering again.'

Measuring around 200 by 150 centimetres, many of Rooney' canvas-based works are designed to reflect the wingspan of the average woman, and the colours she uses—pastel pinks, pale yellows, and sky blues—reference her mother's paintings of her suburban childhood home. Rooney's painting practice could also be considered as a contemporary, feminist reclamation of the intuitive mid-century action painting movement, placing her in dialogue with artists such as Michaela Eichwald and Amy Sillman.

Describing her bodily approach to painting—physically and conceptually—Rooney once said, 'The body is always present inside of my work ... The paintings for me are journeys between the space of the body and the space of the outside, the private and the public, the domestic, the interior and exterior landscape of our society.'

Rooney often utilises her exhibition environments as sites of theatrical performance. At Kunsthalle Düsseldorf and Salzburger Kunstverein, she worked with choreographers and dancers—some donning floating, painted gowns—to transpose her poem SUN DOWN MOON UP into a physical happening, where the figures both merged into, and clashed with, a mural painting behind.

In HUSH SKY MURMUR HOLE, her 2020 solo exhibition at the Museum of Contemporary Art in Toronto, Rooney treated the walls of the exhibition space as canvas by painting and sandblasting them. She also presented sculptural works made up of found and adapted materials: steel café umbrellas, crumpled oil barrels, and covered street signs, all appear appliqued with the artist's signature sugar-toned palette. One installation, titled Love—we're making a run for it, shows two fabric sculptures, huddled on the floor like animals or human figures, imprisoned behind metal barricades. Works such as this symbolically decompress rigid, tense and standardised elements of civic control—while their absurdist nature recalls the intentions of Isa Genzken and Rachel Harrison.

For BONES ROOTS FRUITS (2021), Rooney's first exhibition in London after a five-year hiatus, Thaddaeus Ropac exhibited an important series of portraits, titled 'Old Baggy Root' (ongoing since 2011). The surreal works are made from observing figures in public spaces and the more nightmarish paintings in the series incorporate therianthropic representations of human and animal faces to evoke the laden violence of society rooted in the body. As Emily LaBarge wrote: 'Rooney's figures are at once specific and amorphous, friendly and threatening, powerful and injured—as though their outward forms have struck a bad bargain with the darker registers of the world'.

Curatorial demand is skyrocketing for paintings by Megan Rooney.

Be among the first to know when new artworks and exhibitions by Megan Rooney are added to Ocula.
Sign UpLogin