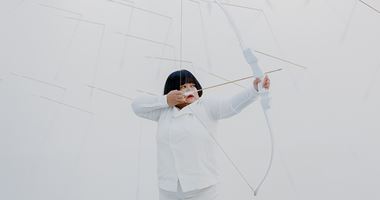 Melati Suryodarmo is an internationally known Indonesian dancer and performance artist. Her practice, which incorporates dance-based performance and photography, is an ongoing exploration of the body's movements in relation to the self and the world.

Born in Surakarta, Indonesia, Suryodarmo initially studied international relations at Universitas Padjadjaran, Bandung, Indonesia. In 1994, Melati Suryodarmo went to study fine arts at Hochschule für Bildende Künste Braunschweig in Germany, and she graduated with an MA in Performance Art in 2002.

During her studies, Melati Suryodarmo was supervised by Marina Abramović, who taught her durational performance art, and Anzu Furukawa, who trained her in the discipline of Butoh dance (a Japanese form of dance theatre). Suryodarmo's art brings together dance, Butoh, history, life experiences, and daily meditation based on the Javanese 'sumarah' life philosophy. The result is expressed in live and filmed choreographed performances and photography.

Through performance, Suryodarmo explores the way the body non-verbally translates and expresses the influence of the self—one's memory and identity contained within the body—to the external world. In each performance, poetical acts and abstract gestures are recontextualised to new meanings and environments. The environment and objects Suryodarmo interacts with, as well as the clothes she wears, are carefully chosen to generate new meaning.

While drawing upon the rituals and stories of traditional Indonesian culture, these too are recontextualised for the modern era. In The Promise (2002), for example, Durga—a female figure from Javanese cosmogony—is incorporated into a discussion of contradictory contemporary perspectives of gender.

Thickly layered with pathos, Suryodarmo's performances often use physical means to discuss deep emotional themes drawing from love, failure, displacement, and history. The '"aha" moment of perception' her performances inspire, Suryodarmo explained in conversation with Ocula, 'is like opening up to knowledge about new emotions, or perhaps something remembered that was forgotten, neglected, and that has only just reappeared.'

Melati Suryodarmo's butter dance in Exergie—butter dance (2000) is aimed at capturing a specific time in life where there are risks and the potential to fall and need to pick oneself up again. The performance captures that physical moment repeatedly, as she dances on a slippery pile of melting butter, loses control, falls, and gets back up again.

Likewise, Melati Suryodarmo's I Love You, (2008) uses a physical process to capture the struggle and limits of our capacity to carry and express affection. For five hours, she repeats the words 'I love you' while holding up a cumbersome glass panel. In Transaction of Hollows (2016), Suryodarmo slowly shot hundreds of arrows in a closed white space to explore the contradictions of the human quest for love and war.

These expressions are not limited to performance. Melati Suryodarmo's STPI residency in Singapore in 2019 generated a body of new print and paper works. These recent two-dimensional and relief works enigmatically engage with explorations of matter and memory, as well as personal experiences of displacements.

Melati Suryodarmo's biography is crammed with appearances at various international festivals and biennials, including the Venice Biennale and Manifesta, as well as a worldwide itinerary of institutional and gallery shows. Her work also features in major public collections, including the Singapore Art Museum, National Gallery of Australia in Canberra, and Akili Museum of Art in Jakarta.

Continuing to contribute to development in her field, Melati Suryodarmo completed a PhD at the Indonesian Institute of the Arts, Surakarta, in 2016. She has also actively worked to support and engage with the next generation of performance artists through various performance art laboratories, workshops, and art events.

Read More
Ocula Conversation Emi Eu: ‘We have to look at Southeast Asia as one market’ By Stephanie Bailey, Singapore

STPI's Emi Eu reflects on S.E.A. Focus, an STPI project platforming artists and galleries from Southeast Asia, in the wake of Art Stage's decline in 2019.

In 2012, [Melati Suryodarmo][0] opened Studio Plesungan in her native Surakarta, also known as Solo, the historic royal capital of the Mataram Empire of Java in Indonesia. Suryodarmo had returned to I

Melati Suryodarmo's greatest asset is her Javanese dance- and butoh-trained body, the limits of which she explores in durational performances. The latter range from full-sprint displays of power (as i

Under the artistic direction of Susie Lingham, Director of the Singapore Art Museum, and nine other curators, the fifth edition of the Singapore Biennale, An Atlas of Mirrors, showcases sixty artists and three artist collectives from nineteen countries and territories around South, East, and Southeast Asia. Spanning eight venues in close...

Be among the first to know when new artworks and exhibitions by Melati Suryodarmo are added to Ocula.
Sign UpLogin