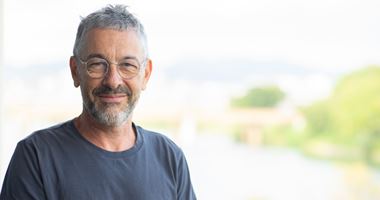 Pierre Huyghe is a multi-disciplinary artist who explores the semiotics of images, and the intersection of fiction and reality through film, sculpture and public interventions. Huyghe graduated from the École nationale supérieure des beaux-arts in 1985 and is renowned for his innovation of the 'post-production' technique in the 1990s, which involves the reproduction of art forms through pre-existing films and images from mass media.

Among Huyghe's most well-known work is L'Ellipse (1998), in which the artist fills the narrative gap of a jump-cut from Wim Wenders' film The American Friend (1977). Huyghe's revision stars Bruno Ganz, who also starred in the original film. In The Third Memory (2000), Huyghe blurs the line between fact and fiction by re-enacting a hold-up scene in a bank in Sidney Lumet's film Dog Day Afternoon (1975). In Huyghe's film, a protagonist playing bank robber John Wojtowicz expresses how Dog Day Afternoon influenced him instead of recounting the actual heist, thus confounding the viewer as to the actuality of the event.

Huyghe also regularly blurs fact and fiction in his public interventions and 'living systems'—environments in which he often incorporates live creatures such as insects, plants, animals and humans. A Forest of Lines (2008)—Huyghe's commission for the 2008 Biennale of Sydney—consisted of 1000 trees embedded in the Concert Hall of the Sydney Opera House. The installation erased the boundaries between the art and its spectators, allowing them to become the performers of the work.

Huyghe regularly collaborates with other artists, namely Philippe Parreno with whom he purchased the rights to a manga character called AnnLee in 1999. AnnLee has appeared in several of his works and those of other artists, including Parreno's 3D film Anywhere Out of the World (2000), which sees AnnLee declare her ambiguous existence as exempt from copyright restrictions, calling attention to the notion of authorship that is regularly explored throughout Huyghe's practice.

Huyghe's work has been presented in numerous solo exhibitions, including Streamside Day at Moderna Museet, Stockholm in 2005; Streamside Day + Streamside Day Follies at Dia Center for the Arts, New York in 2003; and No Ghost Just A Shell at Van Abbemuseum, Eindhoven in 2005, to name a few. In 2001 he received the Special Jury Prize of the 49th Venice Biennale, followed by the Solomon R Guggenheim Foundation's Hugo Boss Prize in 2002.

In 2020, Pierre Huyghe's Exomind (Deep Water) (2017), a sculpture of a woman with an actual beehive on its head, was included in the year's Taipei Biennial.

Huyghe lives and works in Paris and New York.

View All (12)
Ocula Insight A Guide to the Extreme Self in the Age of You By Dorian Batycka, Dubai

Pandemic misery finds company in artworks responding to the Fukushima disaster, the Christchurch earthquake, and other calamities stretching back 3.2 billion years.

The 12th Taipei Biennial is imagined as a galaxy of interconnected 'planets', which offer different ways to understand and rethink life on earth.

Five large, freestanding LED panels fill the spaces of the Serpentine. Despite their technological nature, they look like temporary plaster walls and give the rooms a stripped appearance. Images scrol

Be among the first to know when new artworks and exhibitions by Pierre Huyghe are added to Ocula.
Sign UpLogin