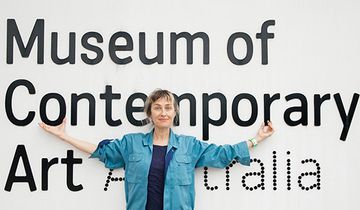 Pipilotti Rist is a Swiss moving image, sculpture and installation artist born in Grabs, Switzerland. In the early- to mid-1980s she studied commercial art, illustration and photography at the University of Applied Arts Vienna, and then video at The Basel School of Design. From 1988 to 1994 she was also a member of the pop music/performance group Les Reines Prochaines.

Rist's international profile skyrocketed when she was selected for the 1997 Venice Biennale and then won the Premio 2000 prize for her video Ever is Over All, which showed her walking down a city street smashing the windows of parked cars with a large flower. More recent awards she has won include the Prix Meret Oppenheim (2014) and the Joan Miró Prize (2009).

In a recent conversation with Ocula Magazine (co-ordinated with her show at the Museum of Contemporary Art Australia, Sydney), she discussed her use of scale:

'How we perceive scale is completely relative. ... In my work, I am referring to inner human worlds, often most active when you feel safe. When you are in a bed, or your home as a symbol of civilisation which is a protection from the natural extremes of temperature, wind, rain and snow. ... The piece I did with the oversized, red living room had visitors sinking back into something they weren't really aware of anymore; sitting in that huge armchair made you remember the time when everything used to be too big and too high, but it was also a time when you knew: it's all mine. For children, the whole world belongs to them. People acted as if the museum was an extended living room. I like that.'

Rist is obviously not interested in lining her works up in a row in an extended linear plane like paintings spread out on a long wall to be contemplated in individual viewer isolation:

'...I treat collective rooms—such as museums—as a space to invite visitors' whole bodies; a space where groups of people who don't know each other can spend time in a common surrounding. ... for my practice it makes no sense to ignore the three-dimensional space and limit the possible posture of just standing on two feet, as well as neglecting the possibilities of the ceiling.'

In 2009 Rist released Pepperminta—her own full-length feature film about a strong-willed 'anarchist of the imagination'—for festivals and various theatres. In this surrealist presentation Pepperminta (Ewelina Guzik) fearlessly lives according to her own codes, inhabiting her own heightened, rainbow-coloured universe alongside two friends—a reflection of the artist's practice, as you'd expect.

Read More Ocula Conversation Pipilotti Rist By Natalie King, Sydney I want to create spaces for video art that rethink the very nature of the medium itself. I want to discover new ways of configuring the world, both the world outside and the world within.