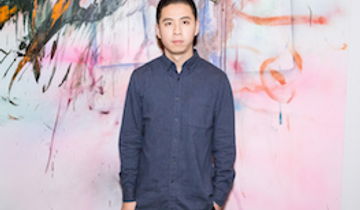 Contemporary Chinese artist Qiu Xiaofei is known for his improvisational canvases that interrogate personal and collective memory, and painting as a practice.

Qiu Xiaofei's paintings have often referenced his own memory. Through his process, the artist explores 'thought diversions,' or the inner workings of his consciousness to be able to consider his personal experiences. In the past, Qiu's subjects have included private diaries, family photographs, and household objects.

Heilongjiang Box (2006) takes its form from the shape of a student's notebook. Inside the box, Qiu had arranged a collection of what appear to be personal belongings, including marbles and coins, and paper printed to look old. While the items are not necessarily 'real', they elicit narratives of a personal history relating to the artist's own life. In the foreword to the work, Qiu writes, 'I really wish that by painting every single day I am able to manifest the whole world I know with the real memories and history of my life ... I hope that my paintings can help people ... and give them hope.'

In 2010, Qiu's fascination with memory shifted from assessing his own experiences to addressing collective episodes. His 2010 exhibition Point of No Return at Boers-Li Gallery, Beijing explored the inner psyche of a mentally distressed family member by translating these feelings and conceptions through his painting. This body of work not only pointed to a sense of personal loneliness, but also to the shared sociopolitical and cultural backdrop of a socialist past.

Qiu's painting process is often improvisational. In his practice, he has taken a turn to acrylic paint after previously working with oil. This transition has allowed him to approach the canvas with more spontaneity as water-based paints dry faster.

Qiu has used palette knives, spray guns, and brushes spontaneously, adding each element in layers to create multidimensional canvases playing with depth and space. In a 2016 interview with Ocula Magazine, the artist remarked that his work mixes both abstract and representational elements in his paintings to create juxtapositions that 'capture a sense of infinite space.'

For the artist, painting can be akin to religion in that it can be used to understand human experience. While his paintings lean toward abstraction, Qiu explores the potential of its form and colour. Through these interrogations into the form of painting, Qiu unravels concepts relating to society, death, and growth while playing with painting's metaphorical underpinnings rather than its overt symbolism.

In addition to painting, Qiu has also explored the potential of sculpture in combination with his canvases. This investigation can be seen in his 2013 exhibition at Beijing Commune, Rauschenberg Said, "The Walking Stick Is Longer than the Maulstick, After All", which referenced American artist Robert Rauschenberg's practice of assemblage that blurred the distinctions between sculpture and painting.

Through this exhibition, Qiu explored themes of interdependence and interference. In Chicken Wood (2013), the artist placed a wood panel leaning against a wall with his painting beside it. In front of this scene, he arranged steel frames with more wood panels, creating a tableau in which visual and conceptual importance is shared between all elements of the work.

My process is quite improvisational and very spontaneous: as I develop each canvas I add on different elements.

Be among the first to know when new artworks and exhibitions by Qiu Xiaofei are added to Ocula.
Sign Up Login