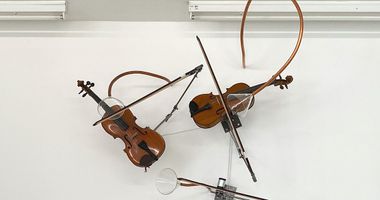 Rebecca Horn is a German contemporary artist known for her body-extensions, mechanical sculptures, drawings, performances, films, and installations. These artworks explore the relationship between the human body and its surroundings, political and historical memory, and human vulnerability.

Horn was born in Michelstadt, Hesse, Germany. While studying at the HFBK University of Fine Arts Hamburg, in the 1960s, she was hospitalised for lung damage from working unprotected with polyester and fibreglass. Confined to her bed for a year, the artist could only draw and sew. This gave rise to her fixation with the human body found in her early wearable sculptures. They came to be known as ‘body-extensions’.

Horn’s body-extensions are simultaneously sculptures and performance accessories, blurring the line between stationary objects and temporary props. Her iconic Einhorn (Unicorn) (1970–1972), for example, consists of a long cone—reminiscent of a unicorn’s horn—and a series of straps (made from wood, fabric, and metal) for securing it to the wearer’s body. The work was designed for a fellow student, who wears it while walking through the woods at dawn in the video Performances II (1973).

In the late 1970s, Horn began to introduce mechanised sculptures into her films. The Feathered Prison Fan (1978)—a human-scaled sculpture with large overlapping feathers that move like a shell to encase whoever stands inside—appears in The Gigolo (Der Eintänzer) (1978), a 45-minute feature film about a man named Max, a blind man, and twins. Fantasy and reality take turns in propelling the narrative forward, emanating the dream-like and illogical quality evocative of Surrealist experimentation. In La Ferdinanda (1981), set in an Italian villa, Horn shows a machine that spreads out and folds beautiful white peacock plumage (The Peacock Machine, 1979–1980).

After periods of living in London and New York, Horn returned to Germany in the 1980s and 1990s to create site-specific installations that incorporated sound and violent activities as haunting reminders of war. For Concert in Reverse, conceived for Skulptur Projekte Münster in 1987, she installed mechanical hammers in the basement vaults of the Zinger, where Gestapo executions had taken place. Concert for Buchenwald, installed in 1999 in a disused tram depot in Weimar near the Buchenwald concentration camp, consisted of a stack of old musical instruments and their cases behind a pile of ash. There is no sound—a silent concert without musicians or audience—apart from the commotion made by a trolley as it regularly travels down the railway line and crashes into a wall at the end.

Other recurring motifs in Rebecca Horn’s oeuvre include the butterfly, which usually takes the form of a pair of fluttering blue wings attached to a small motorised device. In the sculpture Butterfly Body Fantasy (2009), a thin branch hangs upside down in a vitrine while a mechanised butterfly beats its wings on a stick protruding out from a wall. Another sculptural work, Metamorphoses between Rock and Butterfly (2014) juxtaposes the ephemeral beauty of the butterfly with the durability of hard rock, by placing the insect atop a volcanic rock the artist found near Mt Vesuvius in Italy.

Horn has had numerous retrospective exhibitions, including a mid-career survey at the Solomon R. Guggenheim Museum, New York, in 1993, which travelled to Eindhoven, Berlin, Vienna, London, and Grenoble, and Bodylandscapes at the Hayward Gallery, London, in 2005. In 2019 two retrospective exhibitions were held simultaneously at the Centre Pompidou-Metz (Rebecca Horn: Theatre of Metamorphoses) and Basel’s Museum Tinguely (Rebecca Horn: Body Fantasies).

When Rebecca Horn was in art school, she used fiberglass and polyester as sculptural materials. They soon damaged her lungs, forcing her to spend a year in a sanitarium. The months of isolation led to

If you were to imagine Justine, the titular heroine in the Marquis de Sade's late 18th-century novel (also called The Misfortunes of Virtue ), in a tiger pelt, you would be sharing a poetic vision wi

Be among the first to know when new artworks and exhibitions by Rebecca Horn are added to Ocula.
Sign UpLogin