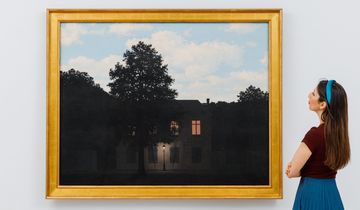 The dream-like imagery and distorted realities in René Magritte's Surrealist paintings had an enduring impact on art of the 20th century.

Magritte was born in Lessines, Belgium. His childhood was marked by both a precocious interest in art—he began his first drawing lessons in 1910—and the suicide of his mother in 1912. Elements of this trauma are speculated to have later emerged as motifs in his works.

He enrolled at the Académie Royale des Beaux-Arts in Brussels in 1916 and later worked as a commercial illustrator and graphic designer. This would financially support him throughout his life and also influenced his bold, poster-like compositions.

Magritte met his future wife Georgette Berger as a teenager. Their relationship was lasting but somewhat fraught; René had an affair with fellow Surrealist artist Sheila Legge in the late 1930s, while Georgette did the same with Surrealist poet Paul Colinet. They eventually made amends in 1940, and Georgette would be René's muse and model throughout his career.

Initially dabbling in Futurist and Cubist styles, Magritte shifted to Surrealism after seeing a reproduction of Giorgio de Chirico's painting Le chant d'amour (1914) and its tableau of irrational objects. Although he would experiment with various styles throughout his career, Magritte is ultimately remembered for his contribution to Surrealism through ambivalent imagery crisply rendered in muted tones.

In contrast to the abstraction of the Parisian Surrealists, Magritte's work is more representational, transposing symbolic images—the bowler hat, the apple, the female torso, the bourgeois man, the window—into domestic spaces, urban environments, and sublime landscapes.

In The Lovers (1928), Magritte paints a cinematic close-up of a couple kissing, each of their heads enshrouded in cloth. The fabric barrier transforms the intimacy of passion into a frustrated and isolating image, suggestive of the hidden, unknowable facets of the human psyche. Motifs of covered figures, objects suspended in space, and obscured identities recur throughout his paintings.

The Treachery of Images

Text and symbol combine to existentially witty effect in Magritte's The Treachery of Images (1929). The painting of a tobacco pipe is captioned with 'Ceci n'est pas une pipe', or 'This is not a pipe'. This simple provocation, which suggests that the viewer is looking at a picture of a pipe rather than a pipe itself, taps into deeper philosophies of representation. Magritte highlights the distinction between image and reality, exclaiming, 'Could you stuff my pipe? No, it's just a representation, is it not?'

The Son of Man

Magritte's The Son of Man (1964) is one of just four self-portraits he ever painted. The work depicts a man in a bowler hat and coat standing in front of a calm sea, with his face largely obscured by a floating green apple. Like most of Magritte's art, the meaning behind the enigmatic image is elusive. He suggested that 'At least it hides the face partly well, so you have the apparent face, the apple, hiding the visible but hidden, the face of the person. It's something that happens constantly. Everything we see hides another thing, we always want to see what is hidden by what we see.'

René Magritte exhibited regularly during his lifetime, although only gained widespread popularity in his later years. He had his first solo show in the United States at the Julien Levy Gallery in New York, 1936, and in England at the London Gallery in 1938, both of which helped launch his international profile. Prominent retrospective exhibitions have been held at the Museum of Modern Art (MoMA) in 1965, Museum Boijmans Van Beuningen in 1967, and the Metropolitan Museum of Art in 1992 and 2013.

Today, Magritte's works are held in collections around the world, including MoMA, New York; the National Gallery of Art, Washington, D.C.; The Magritte Museum, Brussels; and the Tate Gallery, London.

Read More Ocula News Man Ray’s ‘Le Violon d’Ingres’ Could Become the Priciest Photo of All Time New York, 16 February 2022 If the work sells for its estimate, it will fetch more than any photograph previously purchased at auction.

Read More Advisory Pick All Eyes On Magritte Landscape at Sotheby's 2 March 2022 All eyes are on a landscape by René Magritte selling at Sotheby's Modern & Contemporary Evening Auction in London on 2 March.