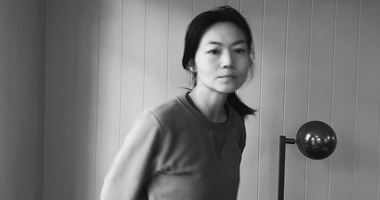 For Renee So, the pomp and grandeur of male self-representation throughout the ages form the basis of her anthropological-interest-turned-formal-experiment. Historically masculine vestments and accoutrements—top hats, beards, pipes, canes—make regular appearances in her ceramic sculptures and knit tapestries, summoning the image of Victorian dandies and other courtly types to whom these dated tokens of masculinity likely belong.

So's compositions emerge out of her research into ancient and early modern forms, among them Neo-Assyrian and Classical sculptures, playing cards, and dandyism, which she brings together in her practice that alternates between a hand-operated knitting machine and ceramic carving tools. In her interview with Vault in 2016, the artist noted that her sculptures emerge from a rough sketch in her mind and the textiles are the product of detailed patterns that are mapped out with geometric rigour onto gridded matrices. So employs a type of knitting known as the intarsia process or picture knitting, which involves working with blocks of colour, while her sculptures are often matte black or white. In either case, both mediums build from top to bottom—the knitting, line by line, and the sculpture, slab by slab.

The bellarmine (or bartmann), a German beer vessel commonly found across Europe in the 16th and 17th centuries, has long functioned as a central motif in So's practice. Mockingly named after Saint Roberto Bellarmino (1542–1621), an Italian Cardinal who condemned the consuming of alcohol, the bellarmine was often adorned with representations of a bearded man (supposedly descended from the 'wild man' figure of medieval European folklore). In So's works, the bearded man's face typically appears doubled, at once upright and vertically upturned like the kings or jacks in playing cards. The stoneware series 'Bellarmine' (2016), for example, depicts the janus-like heads of bearded men combined with variously shaped vessels as their lower bodies. So also mimics the forms of past figurative carvings and hieratic bust portraits by constructing the beards of her bellarmine with bulbous forms, reminiscent of Neo-Assyrian sculptures, or the pantaloon-like containers in Bellarmine XII or Bellarmine XIII (both 2016) that recall trousers worn by men in early 19th-century England.

Another motif that So favours is the cowhide boot. A recurring form in her works is the synthesis of a tall leather boot and her double-headed bearded man, whose playful absurdism unsettles the formality of the tall plinths upon which So's sculptures are displayed. These anthropomorphic forms can also be found in the artist's knit tapestries, which So painstakingly builds up to confect her diagrammatic, cartoon-like figures often surrounded by vast swaths of finely mottled colour. Drunken Bellarmine (2012), for example, depicts a figure with wine glasses for legs, keeling over and slumped at an implausible angle, his state of intoxication and the spilt fluids on the floor punning on the function of his constituent parts. So renders this scene as slapstick in two dimensions, blending the wry sadism of physical comedy with the aesthetic forms of Neo-Assyrian carving and cartoon graphics into her signature stylised hybrids.

So graduated with a BFA from the Royal Melbourne Institute of Technology in 1997 and moved permanently to London following her Australia Council London Studio residency in 2005. She has held solo exhibitions internationally, including Bellarmines and Bootlegs, Henry Moore Institute, Leeds (2019); Vessel Man, Roslyn Oxley9 Gallery, Sydney (2016); and Renee So, Kate MacGarry, London (2016).

Renee So Represented By

Renee So In Ocula Magazine

[Renee So][0]'s first institutional solo exhibition in Europe, Bellarmines and Bootlegs (8 March–2 June 2019) at the Henry Moore Institute in Leeds, centres on a long-standing motif in her work: th

Renee So In Related Press

David Noonan and Renee So, whose work is shown in concurrent solo exhibitions at Sydney's Roslyn Oxley9 Gallery, share an interest in the research, appropriation, and reconfiguration of traditional ic

London artist Renee So found the inspiration for her current body of work in the hallowed halls of the Victoria and Albert Museum, where she'd stumbled upon a collection of so-called German Bellarmine

The first thing that needs to be known, if reproductions are all there is to go by, is that Renee So's two-dimensional works are knitted. These are not flat, static drawings but aerated designs with a

Read More
Related Press Artist of the week 175: Renee So 2 February 2012, The Guardian

With their penchant for drunken acrobatics and big jolly beards, the characters Renee So brings to life are a lovely gang of odd bods. In the giant 'knitted portraits' she creates on a 1970s pre-compu

Be among the first to know when new artworks and exhibitions by Renee So are added to Ocula.
Sign UpLogin