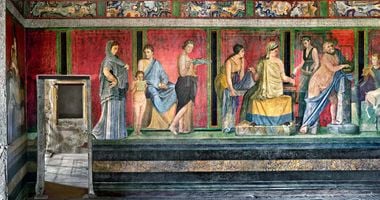 Robert Polidori is a Canadian-American photographer renowned for his large-scale, meticulously framed images of human habitats and urban environments. Focused on the psychological resonances of an environment's history, Polidori's photographs act as commemorative relics in the wake of natural disasters or human conflict.

His photographic work, including his series documenting Hurricane Katrina's devastation of New Orleans, the environmental fallout of Chernobyl's nuclear power plant, and the decline of Beirut's Hotel Petra in the aftermath of Lebanon's civil war, has earned him recognition as one of the world's preeminent practitioners of large-scale photography.

Born in Montreal in 1951, Polidori's family moved to the U.S. in 1960, where his father worked as an engineer for the Air Force and NASA. Beginning university in Florida, Polidori was inspired to study filmmaking and moved to New York City, where he was hired by the avant garde filmmaker, Jonas Mekas, as a theatre manager for Anthology Film Archives. While assisting Mekas, Polidori produced four films that were exhibited in 1975 at the Whitney Museum of American Art. In 1980, Polidori graduated with a Masters in film from State University of New York, Buffalo.

Moving to Paris in 1983, Polidori embarked on his first major project, documenting the restoration of the Château de Versailles. Over a 30 year period, he produced forensic-like photographs that elevated the status of his captured environment to that of 'memory theatres'. Between 2008 and 2015, Versailles travelled to Edwynn Houk Gallery, Zurich; Flowers Gallery, London; Mary Boone Gallery, New York; and Galerie de Bellefeuille, Montreal. Included as part of Polidori's retrospective at the Musée d'art contemporain de Montréal in 2009, the series was heralded by curator Paulette Gagnon for how their 'subtle colours and perfect harmony of line and material seem to endow the image with some of the power and appeal of paintings.'

Polidori worked as a staff photographer for The New Yorker from 1998–2006. During this period, he embarked on a number of projects photographing 'dendritic cities'—a term he uses to describe the built sprawl of poverty stricken locales. 'I began this series in 1996 when I chanced upon the auto-constructed settlements in Jabal al Qal'a (Amman Citadel),' Polidori explains. 'This whole settlement was constructed within three years by Palestinians espoused from Kuwait in 1991 and I was amazed by the vast and rapid expansion of this new "organic" urban growth.'

Polidori's exploration of dendritic cities has seen him document the slums of Mumbai, the favelas of Rio de Janeiro, the settlements in Amman, and the fading grandeur of Havana in works such as 60 Feet Road (2016), Dharavi #1 (2008), and Amrut Nagar #3 (2011).

Polidori's 2006 series, 'After The Flood', documented the widespread damage, collapsed infrastructure, and devastated neighborhoods of New Orleans in the wake of Hurricane Katrina. Devoid of people, these works epitomise Polidori's ability to represent human fragility and identity through the environment he captures. Presented at his well-attended show, New Orleans after the Flood, at the Metropolitan Museum of Art in New York, the series also travelled to Flowers East, London; Nicholas Metivier Gallery, Toronto; Jarach Gallery, Venice; and Arthur Roger Gallery; New Orleans.

Other notable projects include a 2001 series documenting the aftermath of the 1986 Chernobyl nuclear power disaster in Pripyat, Ukraine and the architectural remnants of the abandoned Hotel Petra in the wake of Lebanon's civil war.

In line with his characteristically poetic framing of interiors, Polidori's has also undertaken more commercial projects that include capturing the art collection of French fashion designer, Yves Saint Laurent, and the Autumn 2011 campaign of Italian fashion house, Bottega Veneta, at Palazzo Papadopoli in Venice.

Polidori has won numerous awards for his photography, including the World Press Award for Art (1998) and the Alfred Eisenstaedt Award for Magazine Photography (1999 and 2000). In 2020, Polidori was the recipient of a Guggenheim Fellowship.

View All (5)
Related Press 'You always find something different': Sir Elton John on his love of photography 14 March 2017, Christie's

‘A photograph brings me so much joy, they’re beautiful objects,’ says Sir Elton John, discussing a remarkable collection of 25 works by some of the world’s greatest photographers, to be offered at Ch

Read More
Related Press 'The world we live in: through the lens of contemporary photography' presented by Sundaram Tagore Gallery and Collective 88 in partnership with Ayala Museum

Sign up to be notified when new artworks and exhibitions by Robert Polidori are added to Ocula.
Sign UpLogin