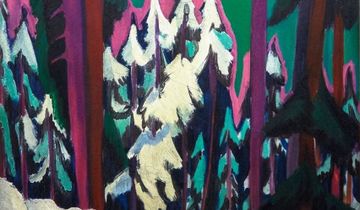 Often rendered in unconventional materials, Rudolf Stingel's artworks variously present painting as an automatic and democratic activity, questioning preconceived ideas of authorship, display, and authenticity. Stingel participated in the 2006 Whitney Biennial and has held numerous presentations at the Venice Biennale.

Rudolf Stingel first received recognition in the late 1980s, at a time when the relevance of painting to contemporary artmaking was being hotly contested.

Stingel began by producing a series of monochromatic paintings with undertones of red, yellow, or blue, made by applying silver paint to a monochromatic background through a layer of fabric, such as gauze. The series was Stingel's first insistence on painting as a conceptual act, reducing it to ideas of colour, surface, and space. His problematisation of the role of the artist's hand, the use of a fabric screen, and the multi-textured, multi-layered paintings that resulted also proposed painting as a result of process or chance as much as design or intention.

In 1989, Stingel produced Instructions, a manual on how to create one of his silver paintings. Produced in several languages, Rudolf Stingel's Instructions was made through silkscreen printing and arranged in a grid format, recalling Andy Warhol's idiomatic appropriation of 'low art' techniques and conventions, such as those used in advertising. By disclosing his own production process, Stingel opened his artwork up to possible reproduction, challenging notions of originality and authenticity, as well as the mythology of the artist. Instructions was shown at the Venice Biennale in the same year.

The early 1990s marked the beginning of Rudolf Stingel's inquiry into the relationship between painting and space through increasingly immersive installations. In his 1991 exhibition at Daniel Newburg Gallery in New York, the artist installed a bright orange carpet in an otherwise empty gallery, forcing viewers to consider the pictorial qualities of the gallery's interior.

This preceded Stingel's Venice Biennale presentation in 1993, where he returned to install a huge orange carpet pinned to the wall of the Arsenale. Featured as part of Aperto '93, a portion of the Biennale exhibiting the work of emerging artists and new tendencies in art, the untitled piece challenged traditional notions of painting, its conventional materials, and its normative forms of display. Viewers were also invited to touch and sculpt the 1.5cm-thick rug, introducing a participatory element to the work.

For his solo exhibition Rudolf Stingel (2001) at Museum d'Arte Moderna e Contemporanea in Trento, Italy, Rudolf Stingel covered every available surface in a room of the museum with Celotex, an aluminium-coated insulation board. Visitors were invited to draw, write, and otherwise mark the malleable silver surface, resulting in an evolving artwork that continued to accumulate scribbles and scratches throughout the exhibition. By surrendering the production of the artwork to an anonymous public and embracing the normatively 'unartistic' mark-making associated with doodling and graffiti, Stingel refused the artistic mark as a sign of individual genius.

This work was repeated at the 50th Venice Biennale in 2003 and again at Stingel's mid-career retrospective, Rudolf Stingel: Paintings 1987–2007, held at the Museum of Contemporary Art (MCA), Chicago, and the Whitney Museum of American Art, New York, in 2007. Stingel's installation at the MCA occupied the entirety of the museum's three-storey atrium and included a suspended crystal chandelier.

Since 2005, Stingel has created photorealistic oil paintings. These include portraits of himself and others, as well as the more traditional subjects of sunsets and mountain ranges, all based on photographs taken by others. His first series of self-portraits, 'Untitled (After Sam)' (2005–2006), is based on American photographer Sam Samore's black-and-white portraits of Stingel. That year, the artist also began a series of paintings depicting himself at various stages in his life, which include highly detailed renderings of the creases and folds of the original photographic print.