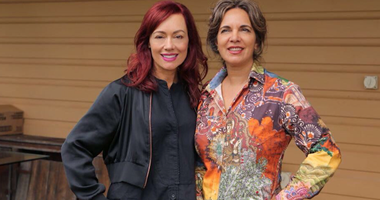 Tracey Moffatt is an Australian photographer and filmmaker who came to prominence in the late 1980s, producing a robust body of work that strikes a profound, somewhat uncomfortable chord in the viewer, addressing difficult, deeply rooted issues surrounding race, sexuality, history and identity. Her photographs are elaborate, dramatic and almost filmic, driving the subject at hand. This has had an influential effect on her films, which are highly experimental, both formally and stylistically, and echo the non-realism of still photography.

There is a strong narrative through her work, yet this is unstated and non-linear, being implied by portraying the pain and uncertainty that comes with the above issues. Reflecting Moffatt’s own life and experiences—such as the contentious relations between white Australians and Indigenous Australians in her celebrated 1989 series Something More—her use of unwritten narrative allows her to side-step specifics and create more universal observations.

Moffatt studied visual communications at the Queensland College of Art, graduating in 1982, first showcasing her works in a solo exhibition in 1989 at the Australian Centre for Photography in Sydney. She has since exhibited in many major museums and galleries around the world including the Museum of Contemporary Art in Sydney (2003–04); Hasselblad Centre in Gothenburg, Sweden (2004); and the Art Gallery of South Australia, Adelaide (2011), and has works in the collections of Tate, the National Gallery of Australia and the Museum of Contemporary Art, Los Angeles.

Moffat’s films have had much international success, including being selected for official competition at the 1990 Cannes Film Festival, and her first feature film, beDevil, being selected in 1993. She has also exhibited at the 1997 Venice Biennale, in the Aperto section, and in 2007 was awarded the 2007 Infinity Award for art by the International Center of Photography.

Since graduating from Queensland College of Art in 1982 and following her first solo exhibition at the Australian Centre for Photography, Sydney, in 1989, Tracey Moffatt has become one of Australia

Having held the dual role of co-directors of Brisbane’s Institute of Modern Art (IMA) for almost two years, Aileen Burns and Johan Lundh have shaken up the city’s contemporary art land

_My Horizon can be about one wanting to see beyond where one is. It can mean to have vision. It can mean to project out and exist in the realm of one's imagination. This is what artists do, this is wh

Read More
Related Press 11 national pavilions and exhibition to see at the 57th Venice Biennale in 2017 23 May 2017, Art Radar Journal

Be among the first to know when new artworks and exhibitions by Tracey Moffatt are added to Ocula.
Sign UpLogin