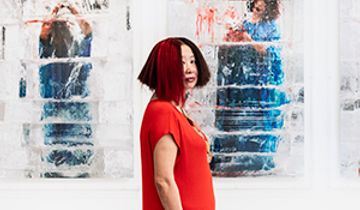 Though Chinese artist Xiao Lu (肖鲁) operates across a range of media in contemporary art, her work is grounded in performance. The artist sees performance art as a way of releasing internal conflict and negative emotions such as anger and hatred. As such, her artworks are often very personal explorations of concerns regarding gender power dynamics, communication, and the precariousness of life in the face of both social and natural forces. Chance is often a deciding factor in the outcome of a work, and her work is often also characterised by a certain amount of inherent violence in its making. The risks to the artist inherent in many of her performances are genuine, and on occasion she has suffered actual harm in the execution of her work.

Xiao Lu first came to public attention for her installation Dialogue at her graduation show in Beijing in 1989. The work comprised two phone kiosks (a novelty in China at the time) between which a red telephone rested on a plinth, its receiver hanging loose to the floor. Life-size images of a woman and a man with their backs to the viewer covered the glass doors of the phone booths. At the exhibition's opening, to the surprise of those in attendance, Xiao Lu produced a pistol and fired two shots at the installation. The incident caused an immediate shutdown of the exhibition. The artist's then-partner Tang Song—and later the artist herself alongside him—was briefly arrested and detained; the couple subsequently spent an extended period living in Sydney. Initially—and for many years afterwards—the conceptualisation of the work was attributed to Tang Song; however, with much effort on Xiao Lu's part, the record was eventually set straight.

In 2003, after a long hiatus, Xiao Lu resumed her art practice. In an attempt to come to terms with the traumatic events of 1989—including the pro-democracy protests in Tiananmen Square—that had shadowed her life to that point, the photographic work 15 Gunshots... from 1989 to 2003 (2003) comprised 15 monochrome photographs of the artist pointing a Chinese army revolver straight at the viewer. Presented on the wall in uniform black frames, each image becomes progressively fainter, and each was shot through with a live bullet. These photographs mark the moment when the artist's practice gained a more reflective tone. In a 2019 conversation with Ocula Magazine, the artist observed that in one's youth, one is always looking towards the future, but this work is when she decided to look back: 'for the past 15 years since Dialogue I had my back to the audience but now I want to meet their gaze. I felt that I must face their scrutiny, face the repercussions of those 1989 gunshots and face the past 15 years.'

Xiao Lu's work is firmly grounded in the events of her personal life. In her conversation with Ocula Magazine, she said, 'the experience of each piece is connected to specific contexts that are, for me, memories of my life experiences.' As such, her video installation Sperm (2006) marked a deeply personal experience. The work documents the artist's desperate and ultimately unsuccessful attempt to become pregnant after her split with Tang Song. While IVF treatment is unavailable to single women in China, a Western doctor agreed to the procedure if Xiao Lu was able to find a donor. Men of all ages were invited to provide sperm samples with which the artist would then attempt to conceive. While she was not initially motivated by any feminist agenda, it was during this time that she became increasingly concerned with the dynamics of interpersonal relationships, especially those involving power imbalances between men and women.

Xiao Lu also used her own body as medium for Polar, her 2016 performance at the Danish Cultural Center in Beijing. Using only a knife, the artist attempted to hack her way out from a closed tower of ice blocks. In the process, the knife slipped, slicing her hand, causing her to bleed profusely. The work is presented as four large-scale colour photographs. The artist's blue dress behind the ice—combined with the pooling blood between the frozen blocks—lends the images a painterly, expressionistic look. These photographs were shown at 4A Centre for Contemporary Asian Art, Sydney, in the artist's survey exhibition, Xiao Lu: Impossible Dialogue (19 January–24 March 2019).

For her 2019 performance Tides, Xiao Lu again pitted herself against water. Created as part of her survey at 4A, the work saw Xiao Lu plant 30 three-metre-high bamboo poles in the sand of a local beach as the tide came in. Some poles were knocked over by the force of the waves while others washed out to sea, only to be brought back to shore by the current. The remaining poles were presented in the gallery space as a sculptural installation, propped up against the wall amid deposits of sand from the beach.

In 1997, the artist returned to her hometown of Hangzhou. She currently divides her time between China and Australia.

In the hot heat of the moment, history is sometimes only recorded in snippets. In the flurry to understand, information is conflated, building a historical account that never quite captures the realit

Thirty years ago in Beijing, on the eve of Chinese New Year, contemporary Chinese artist Xiao Lu made her artistic debut by firing a shotgun at her installation Dialogue. Ever since, these famous sh

With Four Decades of Chinese Contemporary Art, the custodians of the future M+ will try to convince a sceptical Hong Kong public that the much-delayed opening of the museum, which is now expected in 2019, will be worth the wait. They will do so by giving locals a first glimpse of some of the most important contemporary art the city has ever...

Chinese artist Xiao Lu shot to fame - or notoriety - when she fired a gun at her own installation in a Beijing exhibition in 1989. Here, she discusses her motives in a short excerpt from a much longe