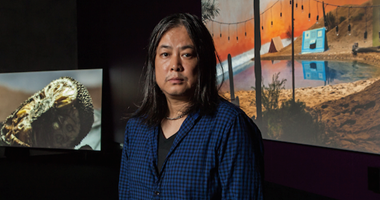 Yang Fudong's natural talent in drawing led him to train as a painter and he graduated from the Oil Painting department of the China Academy of Art in 1995. However, it is film and photography that he is now best known for. Through often lateral, fragmented and surreal means, Yang presents different ways of being in the complex socio-political landscape of his nation, often centring his concerns in the conflict between tradition and modernity.

Yang first rose to prominence in the art world in 2000 following the controversy surrounding his photographic triptych The First Intellectual (2000). The work was removed from the exhibition Uncooperative Approach (Fuck Off)—curated by Ai Weiwei and Feng Boyi—by the Cultural Inspection Bureau, who considered the images inappropriate. The First Intellectual depicts three images of a dishevelled businessman standing in the middle of a city road, briefcase in one hand, brick in the other, blood pouring from his head onto his white shirt. In the centre image the briefcase has left his hand and papers are flying through the air. These images became the seed of Yang's five-part film Seven Intellectuals in a Bamboo Forest (2003-2007), which was mostly shot in Shanghai but presented both rural and urban settings. The film focuses on seven idealistic youths who act on feeling. It references the legendary Seven Sages—a group of third-century Chinese Daoist intellectuals who rejected the morally corrupt government and the normal lives that were being forced upon them. They instead chose to live a life full of music, poetry, alcohol and qingtan (pure conversation).

Seven Intellectuals in a Bamboo Forest reflects Yang's interest in breaking away from mainstream cinematic dogma. The film does not emphasise narrative but instead focuses on long sequences with sparse dialogue. The near-static composition of the filmic picture plane is perhaps influenced by Yang's experience as a painter. This strategy is also visible in Yang's The Fifth Night (2010), shot on a film set at the Shanghai Film Shooting Base. The film is designed to be projected onto seven screens that sit side by side, revealing events like a scroll gradually unfurled. Like Seven Intellectuals in a Bamboo Forest, it follows seven young people, mixing and overlapping perspectives and time continuities. While painterly in its consideration of the picture plane, The Fifth Night is also sculptural; it is part of his group of 'space' films that relate to the presentation of video in three-dimensional space.

In an interview with Ocula in 2015, Yang said of The Fifth Night, 'if the eyes of the audience are focused on the third screen, they'll still be able to take a glimpse of the changes on other screens out of the corners of their eyes. ... Through their eyes, the space films are edited and would become unique to them'. In The Fifth Night, Yang presents what could be interpreted as separate instances but are actually tied together. This is also true of the way the screens themselves must be viewed. In this skewing of perspective, Yang reveals the controlled and selective vision of cinema, and also the woozy instability of reality.

Through his films, Yang ponders what can truly be defined as 'real', and opens up the possibility that the performance of reality comes closer to reality than daily life. In this line of inquiry, the boundaries between myth and memory, as well as idealisation and actuality, begin to blur. In fact, Seven Intellectuals in a Bamboo Forest and The Fifth Night present and blur many dichotomies—man/woman, individual/collective, past/present—and in doing so emphasise the individual identity of each side while simultaneously allowing the pairs to flow freely towards and away from each other. By this method, Yang destabilises definition and allows the viewer greater autonomy in their understanding of the ideologies they have been fed both within and outside of cinema.

Entering Marian Goodman Gallery's London space to view Yang Fudong's solo exhibition, I was stopped short by a wire mesh fence erected just beyond the front desk, barring the way to the exhibition. So

West Bund is in a remote bit of Xuhui, a long way away from the Waitan (the Bund). It was once devoted to heavy industry and even had an airport, but now it’s an 8 km-stretch of arts precinct and the former aircraft factory is an art fair pavilion. The leases though are only for 5 years and the condos are already encroaching. Only 5? Yes, but...

At 2:30 pm on July 2, 2016, Time Test – International Video Art Research Exhibition was unveiled at CAFA Art Museum. The exhibition is jointly hosted by Eli and Edythe Broad Art Museum at Michigan State University East Lansing, Michigan, U.S.A. and CAFA Art Museum. In the axis of the development course of the video art, the project presents...

'Huihua dianying' or 'Painting as a film', a concept that Yang Fudong has been developing for years, evolves in this exhibition as the main way to investigate the spiritual landscape of people. Works

Sign up to be notified when new artworks and exhibitions by Yang Fudong are added to Ocula.
Sign UpLogin