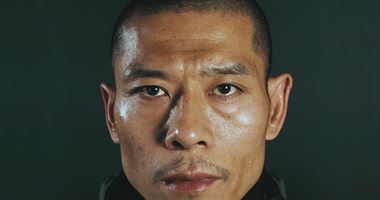 Performance artist, sculptor, painter and photographer Zhang Huan is internationally recognised for his extreme performances of alarming theatricality and endurance that examine the corporeal.

While in Beijing, Zhang began to explore the potential of his body through which to communicate socio-political concerns. Angel, his first performance work staged as part of a group exhibition at the National Art Gallery, Beijing, in 1993, saw the artist use fake blood and dismembered baby doll parts in an allusion to the Tiananmen Massacre of 1989 as well as forced abortions due to China's one-child policy. Hugely controversial, the exhibition was prematurely closed.

In 1994, Zhang performed 12 Square Meters in Dashancun village, a poor suburb in Beijing where the artist and several of his contemporaries had been working. Covering his naked body in fish oil and honey, Zhang sat naked on a stool in a small, stinking toilet, attracting a swarm of flying insects—that he later drowned by immersing himself in a nearby pond—to reveal the dire conditions of living in Daschancun in a silent but visually powerful manner.

Zhang Huan moved to New York in 1998, where he lived for eight years and worked alongside a community of avant-garde artists. Performances from this period began to receive international attention, such as My America (Hard to Acclimatize), performed at Seattle Art Museum in 1999, that involved 54 Americans of diverse age and backgrounds, all naked, and the artist pelted with loaves of bread on a three-tiered scaffold. The performers followed the instructions Zhang had given to them prior to the performance—including Tai Chi practices and pilgrimage—that the artist devised as a reflection of his experiences of adapting to America. Zhang participated in several international exhibitions, among them Inside Out: New Chinese Art, Asia Society and PS1 Contemporary Art Center, New York (1998); Yokohama Triennial of Contemporary Art (2001); and Whitney Biennale (2002), becoming a global sensation.

Returning to China in 2005, Zhang turned to Buddhism and Chinese heritage to create more contemplative works compared to his earlier performances. A recurring material has been ash, left from burning incense sticks commonly used in Buddhist temples, that the artist regards as a deliverer of the human spirit as he told Ocula Magazine in 2015. Mixed with a bonding agent, incense ash is sculpted into forms of Buddhas that slowly disintegrate or used as a material for his haunting yet poignant paintings depicting people from found black-and-white photographs, braille script, and skulls.

Zhang's oil paintings, such as Premature Poppy No.15 (2010) and the 'Spring Poppy Field' (2014) series allude to opium-induced delirium and reincarnation, with grinning skull faces hidden in a vibrant patchwork of colours and wiggly stripes.

One of Zhang Huan's recent exhibitions on Ocula is Convergent Evolutions: The Conscious of Body Work at Pace Gallery, New York (10 September—23 October 2021).

An afterimage is a false visual burned onto the eyes even after its source is no longer being viewed. Victor Wang, the curator of Afterimage: Dangdai Yishu (3 July–7 September 2019) at [Lisson Gall

My first encounter with Zhang Huan's work occurred in Cambodia in 2008 thanks to independent curator Zoe Butt. I was with my artist collective, Stiev Selapak / Art Rebels, and she introduced Zhang's a

Strange to say, although China has 1.4 billion people, it has only one artist, Ai Weiwei. Or so you'd think if you followed the Western news media. Art and China after 1989: Theater of the World at

Read More
Related Press 'Where can the dust alight' at Pace, Hong Kong

A group exhibition at Pace Hong Kong borrows its name from a 7th century stanza by the Buddhist monk Hui-neng, which embodies the Buddhist core philosophy of constant reflection, but also the notion of life without meaning, within a few profound words: “There is no Bodhi tree/Nor stand of a mirror bright/Since all is void/Where can the dust...

Sign up to be notified when new artworks and exhibitions by Zhang Huan are added to Ocula.
Sign UpLogin