Christchurch Art Gallery Te Puna o Waiwhetu is one of the largest art galleries in New Zealand’s South Island, and is home to one of the country’s most important public art collections. The gallery opened for the first time in May 2003, replacing the Robert McDougall Art Gallery, which was the city’s premier public art gallery for almost 70 years. The impressive glass-fronted building of the Christchurch Art Gallery was designed by the Buchan Group and evokes the forms of Christchurch’s River Avon and the koru.

In February 2011, the city of Christchurch suffered a devastating earthquake, which saw the Christchurch Art Gallery being used as the Civil Defence Headquarters and the Emergency Operating Centre until the end of August 2011. While the building survived the earthquake, it did suffer some secondary structural damage, and is still undergoing maintenance. For this reason, the building has remained closed since the earthquake, and expects to reopen in 2015.

The gallery has continued to be a driving force in maintaining Christchurch’s reputation for a creative and innovate art scene through the development of Outer Spaces, an ongoing programme designed by the gallery’s director Jenny Harper, which focuses on exhibiting artworks in small spaces around the city. The programme has allowed the gallery to remain relevant during a time of enforced closure, and has allowed art to reach out to a community that is steadily rebuilding itself 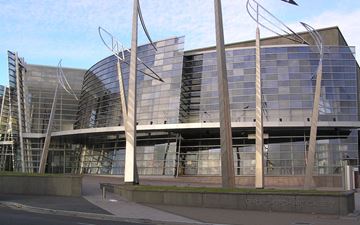 Sign up to be notified when new artworks and exhibitions at Christchurch Art Gallery are added to Ocula.
Sign Up Login