About Museum of Contemporary Art Bangkok

"Love, faith and loyal to national institution, religious and the king have been reflected through various works of arts since ancient times. Thus, the original works of arts portray the ideally beauty that worthy with the main institutions highly respected by all Thai people. When the era had changed, same with the works of arts, it was one person who was the key and played the important role of changing the aspect of arts in Thailand. That person was Professor Silpa Bhirasri (Corrado Feroci), Italian sculptor, who created painting and sculpture courses at Praneet Silpa School which had been changed to Silapakorn University later."

Professor Silpa Bhirasri held to the philosophy “ARS LONGA VITA BREVIS” and used Academic Art to teach his students to improve theirs art skills to the same level as other civilization countries. And by doing so, he was praised to be “Father of Thai Contemporary Arts” The works of arts that received an influence from what Professor Silpa had taught have reflected belief, faith and era revolution which can be compared as a big mirror reflecting both cultural prosperity in Buddhists and civilization of the country.

The long history of Thai arts has been assembled at Museum of Contemporary Art which had been established from “the passion of arts” that Mr.Boonchai Bencharongkul has. But the main reason why Mr.Boonchai built this museum was to celebrate and appreciate the great favor of King Rama 9 and to honor “Father of Thai Contemporary Arts” or Professor Silpa Bhirasri.

From a design standpoint, the building portrays the idea that it has been aesthetically carved from a single piece of granite. The most striking feature of the building is the openwork carvings which adorn either side of the facade, resembling enchanting plumes of jasmine cascading down the wall. The gaps between the jasmine plumes let in natural light tracing the patterns of the carved walls on the floor of the atrium, while revealing in full measure the excellence of the workmanship which can give a different feeling in different seasons. 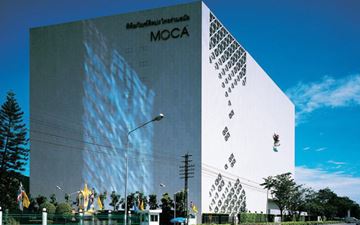 Be among the first to know when new artworks and exhibitions at Museum of Contemporary Art Bangkok are added to Ocula.
Sign UpLogin