Established in 1999 under the name Rodin Gallery, the museum presented its permanent installation of Auguste Rodin's monumental masterpiece The Gates of Hell. Since then, the museum has established itself as one of the central institutions in the Korean art scene and in May 2011, the museum rebranded under a new name, PLATEAU.

With the new name, PLATEAU expresses our renewed commitment to embracing the Korean and international contemporary art scene, in continuation with our permanent display of Rodin masterpieces.

Inspired from the geological terminology which denotes 'highland' or 'sedimentary layer', PLATEAU hopes to expand its original meaning as an exhibition space. As noted by the acclaimed philosophers Deleuze and Guattari, 'plateau' is not a fixed point where porducts of the past are deposited but rather a place that requires endless re-exploration, as well as a mid-point between a beginning and an end, constantly vibrating and always of its own accord. Similarly, PLATEAU also aspires to provide a new experimental ground for the art historical achievements of the past and future to coincide and become reinterpreted with new perspectives.

Moreover PLATEAU also represents the 'higher ground' that artists aspire to accomplish, and a place where art lovers may experience heightened artistic inspiration, not as an exclusive summit of the priviledged, but as a truer higher plain that embraces all. At PLATEAU, we hope to convey art not as an artificial counterpart to nature, but as its complement which by its essence, ultimately must return as part of nature. We envision the infinite artistic possibilities that may unfold above the expanse of 'plateau' and sincerely hope to share the pleasure of experiencing the dynamic developments in contemporary art with PLATEAU. 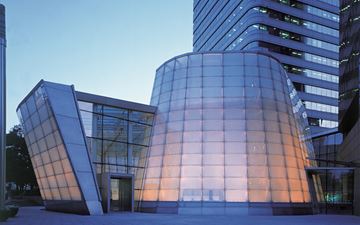 Be among the first to know when new artworks and exhibitions at Plateau are added to Ocula.
Sign UpLogin