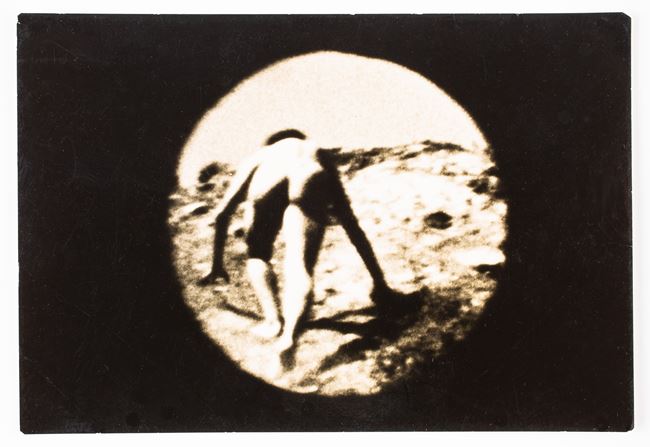 (Film still) Film
'Experiment 002' echoes the generic features of both expended cinema and live cinema. A circular shade was placed on the camera prior to shooting, which turned the camera’s originally square picture frame into a circular one that appeared like a spotlight and also quite voyeuristic. The protagonist, who had a thong on but was otherwise in the nude, was captured on film in an improvised manner running on a grassy hill by the Waishuang Creek in Taipei, with the unsteady image showing him seemingly trying to escape from being captured on film. During the screening, Huang Hua-Cheng placed a camera in a half-cap helmet and then projected the film on six screens on the wall in an improvised way, and the screening was accompanied with voice-overs that were improvised at the event. Each time the film was screened, this experimental film became a unique one-off cinematic experience about capturing and escaping. Prompting associations with 'North by Northwest' by Alfred Hitchcock or 'Bonnie and Clyde' by Arthur Penn, however, Huang never clearly stated his intention for making 'Experiment 002'. It was Kam Ping-Hing, a Hong Kong-based member of Theatre Quarterly who took part in the film, mentioned in an unofficial interview years later that he fled to Taiwan for a while because Hong Kong was quite unstable back then due to the 1967 leftist riots . It was during this specific time that Huang was planning to make 'Experiment 002', so as fate would have it, Kam then became the 'protagonist' of the film. The film’s visual elements, including escaping, being captured, the naked man, and the location chosen which is symbolic of Chinese political orthodoxy because the National Palace Museum had just finished its construction and relocation in Taipei, show that underneath 'Experiment 002'’s experimental intervention of cinematic form, the film also shows a subtle hint of realistic political implication. Private collection.

Be among the first to know when new artworks and exhibitions at Taipei Fine Arts Museum are added to Ocula.
Sign Up Login