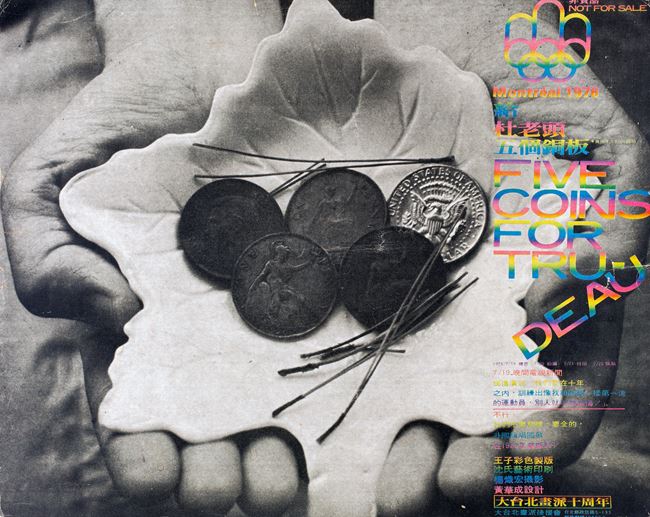 Poster
39 x 31 cm
For the 1976 Olympics in Montreal, the International Olympic Committee officially recognised the People’s Republic of China, and Taiwan was no longer able to participate in the games as 'Republic of China' (ROC). The compromise suggested by the then prime minister of Canada, Pierre Trudeau, was for the ROC team to compete as 'Taiwan' instead, but the suggestion was refused by the KMT regime who was adamant about being the only legitimate government of 'China'. The ROC team then withdrew from the games a day before the opening. Responding to this incident, Huang Hua-Cheng designed and self-funded the production of two posters, titled 'Five Coins For Trudeau'. He replaced the famous Olympic five rings with coins and quoted T.S. Eliot’s poem, 'The Hollow Men,' to mock Pierre Trudeau and international communities for being arrogantly conceited and unabashedly realistic. 'École de Great Taipei 10th Anniversary' was marked on the posters to echo with the bold and uninhibited spirits stated in the group’s 'manifesto' announced in 1966. Courtesy Liang Hsiao-Liang. Private collection.