About Tel Aviv Museum of Art

The Tel Aviv Museum of Art, or TAMA as it is colloquially known, was founded in 1932 by the first Mayor of Tel Aviv, Meir Dizengoff, and was originally located in Dizengoff's own home. As the collection of art grew, it became apparent that the museum required a larger space and in 1959 it moved to its current location. In addition to the main building, the museum also built the Rubinstein Pavilion for Contemporary Art which is home to many temporary exhibitions, and the new Hert and Paul Amir Building, which was designed by Preston Scott Cohen and opened in 2011.

In addition to these three main buildings, the TAMA complex also includes the Lola Beer Ebner Sculpture Garden, Nata's Garden and the Joseph and Rebecca Meyerhoff Art Education Centre. These additional spaces host many temporary exhibitions and community based workshops, focused on engaging visitors with the art on show.

The importance of the museum in the context of Israel contemporary art is recognised in the numerous art prizes awarded to local emerging artists each year. These prizes include the Rappaport Prize for an Establised Israeli Painter, the Rappaport Prize for a Young Israeli Painter, the Eugen Kolb Prize for Israeli Graphic Art and the Shmuel Givon Prize.These prizes hosted by TAMA, exemplify the status of the museum as one of the most important public institutions in Tel Aviv, the self-proclaimed cultural capital of Israel. 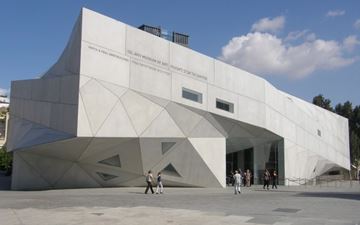 Sign up to be notified when new artworks and exhibitions at Tel Aviv Museum of Art are added to Ocula.
Sign Up Login