Frequencies of Tradition is a major group exhibition presenting artworks and new commissions by 19 international artists and collectives, filmmakers, and scholars that address the entanglements between tradition and modernity in Asia. Resulted from Hyunjin Kim's long-term visual studies and research since 2012, The exhibition is co-organised by the Guangdong Times Museum (Guangzhou) and KADIST (Paris & San Francisco). Frequencies of Tradition is the culmination of a three-year series of programs entitled Frequency of Tradition, comprising seminars, exhibitions, and seminars taking place across Asia, curated by Hyunjin Kim, Lead Regional Curator for Asia and initiated by KADIST.

The exhibition explores the turbulence of imperialism, colonialism, and nation-state building and its impact on tradition, and how it continues to manifest in our lives today. Tradition is still a part of people's daily lives in Asia, connecting generations, transmitting the values of the community, and serving as a living archive of the future emergence of cultures. On the other hand, it is also estranged by perceptions as a source of patriarchy, authoritarianism, and outdated customs. Departing from an understanding of tradition as a contested space where one can critically reflect on Asian modernization, the exhibition provides a liminal space to expand our knowledge of regional modernity.

The works in the exhibition are weaved and intricated with what is derived and extended from unraveling the comprehensive notion of tradition, such as art of narrating and reenacting the old; old and ancestral symbols that bring a sense of belonging and spirituality; cultural things that sustain and stimulate the community's belief system; all related on-going cultural reproductions, and the substantive nature of tradition in vulnerability and transformation. While these would be the common understanding of tradition, the tradition in many Asian regions has been further refracted and complicated through other prisms of pan-Asianism, Orientalism, the Cold War ideology, in addition to nationalism.

Westernisation has always been synonymous with East Asia's modernisation, as seen in the late 19th century. Asia itself has absurdly propelled (and promoted) the discursive cultivation of "Asia." In the aftermath of Asia's encounter with the ambivalent images of the West as exploiter and of progress, one criticises Western Orientalism as originating from the vein of Western self-centrism, and Asia has strived to be an antipode generated by the figure of the West. Japanese intellectuals sought to emulate the West following the Meiji Restoration and strove to construct "Asianness" as a counter-image of the "West." Non-modern primitive nature, associated with sublime images of high mountains or a waterfall, were often instrumentalised for Asian spiritual tradition under Japan's Pan-Asian ambition, which later colluded with the Pacific War through Japanese militant nationalism.

Tradition in Asia can also be understood as an apparatus under competitive nationalism and modernisation projects. In South Korea, as the nation initiated and accelerated industrial modernisation, a military dictatorship in the 1960s and 70s oppressed and launched a movement to eradicate age-old religious forms such as Shamanism on the basis that they were "unscientific" or "irrational."

Under Cold War states in Asia, tradition is often acclaimed by the act of naming, where its characteristics are selected through complex Cold War tensions with the neighbouring countries. Through immediate interventions by or incidental relations with the grand cold war discourse during the 20th century, such as the reverse-mirroring cultural policies over Confucianism between Taiwan and mainland China, South Korea, and North Korea in the 60s and 70s. Tradition was discarded, devastated, and forced to be formed, and named as part of the national and ideological narrative. Further examining the transgressive potential of the performing arts, the exhibition brings attention to the temporal particularities of traditional dance and music that transcended oppression by modernity's grand narratives.

The works in Frequencies of Tradition weave together multiple nodes and trajectories through the compelling aesthetics of time-based mediums like video, film, and performances. While ancient animism reveals the equivalence between primeval objects and the futuristic memory sphere, the reality of ruin swaying between the modern and the non-modern lingers enchanted and haunted, invoking an emotionally and psychologically complex. The works invoked by long traditional methods such as craft in weaving and traditional ink painting present intriguing medium practice today. Lastly, we see how the ebb and flow of tradition is not reliant on certain official authorities, with the portraits of unruly women, with the oral transmission of elderly rendering an empowering moment for a ravaged community; with the delightful pilgrimages of different generations sustained by modern machines, and finally with the queering tradition entangled with the genderqueer community. Through fascinating collective memories, spirituality, archival imagination, different technological engagements, and empowerment, the exhibition reveals a mode of the ungovernable. While asking how the development, modernisation, the violence of conventions, nationalism, and the norms of such histories continue to manifest and materialise today, the exhibition uncovers an enthralling space found in and through tradition, where one can encounter the vernacular plural state of Asian modernisation. 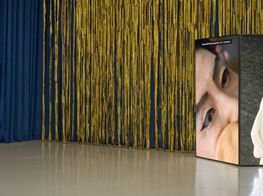 Sign up to be among the first to know when new exhibitions by Curated by Hyunjin Kim or at Guangdong Times Museum open.