'I hope that people see their capacity within their sphere of interaction, to respond to larger ecosystems, to feel and be a part of them' – Tomás Saraceno

According to the cosmological model, our universe grew up in a structure on a huge scale. Cosmologists have theoried that after the Big Bang, the entire universe formed an interstellar network, with clusters of galaxies connected to each other, also known as the 'cosmic web'. In 2019, Japanese astronomers made the first direct observation of two gas filaments stretching more than 3 million light-years, gradually confirming the theory. Tomás Saraceno, an Argentinian contemporary artist, perfectly presented the arguments of the cosmic web with his experimental art creation.

Spiders, creatures that have existed on Earth for at least 120 million years, communicate with each other and their prey by spinning intricate webs and feeling the smallest vibrations. Saraceno suggests that spider silk may be the key to a new understanding of the future for human beings. By scanning the filaments, we can explore the connections and interactions of the cosmic web in the structural arrangement. Spider silk is like a miniature cosmic web, linking living organisms and non-living organisms and cross-species for cooperation and communication to form a structured social system. This exhibition features Saraceno's iconic giant installation, which simulates a spider's web, inviting the viewer to connect with space and each other through touching and feeling vibrations. The exhibits also include works on future architecture and aerodynamics to present Saraceno's perspective on environmental sustainability issues.

Born in Argentina in 1973, Saraceno now lives and works in Berlin, Germany. He studied architecture at an early age and went on to earn a Master's degree in architecture. In 2001, he went to Germany to study art and in 2009 he joined NASA's International Space Research Program. These interdisciplinary experiences combine creation with aesthetics, architecture, science, and environmental causes in a new balance that no longer separates art and science. Saracen also believes that we should learn and pay attention to the principles of ecology as a system of cohabitation of different cultures and regions, and understand the necessity of the principle of cooperation in the universe in which we live, in order to seek answers for the future survival of the human species. 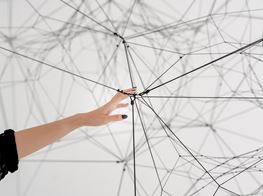 Sign up to be among the first to know when new exhibitions by Tomás Saraceno or at Winsing Art Place open.